Possibly the only mutant who can pull off both incredibly cute and incredibly ferocious, Wolverine’s trusty sidekick Jubilee definitely deserves a beautiful statue rendering all her own. And she’s come a long way from being a mall runaway on the pages of the 1989 X-Men comic, eventually becoming the youngest member of the X-Men. Jubilee also went through the crazy ride of turning the world upside down with her pyrotechnic capabilities, only to be de-powered and then turn into a vampire. Phew! We’ll be lucky if our lives are half as exciting.

She is next in the series of Marvel bishoujo figures, released in partnership with renowned Japanese designer toy manufacturer Kotobukiya. Based on a new illustration by master artist Shunya Yamashita, this version of Jubilee is aesthetically stunning in an updated costume. Jubilee, standing seven inches tall, is sculpted by Gotaro Takeuchi from Atelier Bamboo in such a way that’ll make you think that she’s about to release an intense show of pyro plasmoids. Scoop up this “rad” (hey, she is an ’80s kid) statue now!

We’ve seen a variety of mutant heroes and even some reformed villains battling the holographic dangers in the X-Men training facility, and the latest fan-favorite character to return to the training facility with a new look is WOLVERINE BROWN COSTUME! A nearly immortal mutant with a powerful healing factor and heightened senses, Wolverine was further enhanced by an adamantium-laced skeleton and ultra-sharp claws. Throughout his years with the X-Men he’s worn several different costumes, with the brown and yellow one of the most popular with his fans. In all of his incarnations he’s served as one of the team’s most powerful fighters, honing his skills in the Danger Room. Ever since the early days of Marvel Comics’ mutant adventures, “X” teams have trained together in the ultra high tech facility known as the Danger Room, equipped with state of the art adaptive combat and athletics routines that challenge each participant in unique ways. The training facility has been featured prominently in X-Men comics over the years, as well as in various cartoons and X-Men films.

The movie-accurate collectible is specially crafted based on the image of Hugh Jackman as Wolverine in the movie featuring a newly developed head sculpt, two styles of claws and costumes, and an engraved metal Japanese sword. 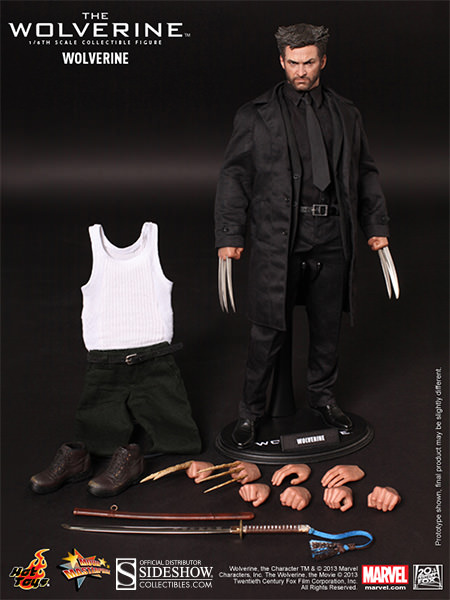 We don’t have any X-men: Days of Future Past related toys yet.  We are pre-selling the Wolverine 12 inch Figure from Hot Toys which is expected to be released in May of 2014.  Pre-book yours today.

Sideshow Colelctibles and Hot Toys bring us an awesome figure based on Hugh Jackman’s performance as X-Men powerhouse WOLVERINE, based on his look in X-Men: The Last Stand. A screen-accurate design, it has a ton of features/accessories to brag about but before you look at those, check this out:

Authentic and detailed fully realized likeness of Hugh Jackman as Wolverine in the X-Men: The Last Stand movie
Approximately 30 cm tall muscular body with over 30 points of articulation
Movie-accurate facial expression featuring his angered expression with detailed wrinkles and skin texture Detailed hair sculpture and beard
Three (3) pairs of interchangeable gloved palms including:
One (1) pair of fists with blades
One (1) pair of fists
One (1) pair of relaxed palms
One (1) set of X-Men suit including one (1) leather-like black jacket and one (1) pair of leather-like black pants
One (1) pair of black boots
Light-up figure stand imitating the movie scene with transparent pillar (Requires AAA Batteries – Not Included)
Figure stand with Wolverine nameplate and the movie logo

An exclusive figure, this awesome masked Wolverine is the latest addition to Marvel Select’s awesome line.

Standing about 8 inches tall, his brown costume is a more muted (and more awesome?) version of the stark yellow and black outfit we’re used to seeing. He comes with a sweet figure stand and a Samurai base that makes us all the more excited for the upcoming Wolverine-in-Japan film, The Wolverine.