In the action-film community, it’s already old news that Marvel and Warner Bros. (who holds the film rights to DC characters and storylines) are coming out with 19 new movies from now until 2019. Some pop-culture and comic-book heads have gone positively haywire with excitement, but others aren’t so stoked. But why? Whatever could possibly be wrong with some of DC and Marvel’s most revered and treasured personae and narratives coming to life on-screen? Isn’t this what all of us have wanted for literally years?

Not always, argues Vox’s Todd VanDerWerff, who says that he looks at a master list of the new film slate and “see[s] a long list of chores.” Which, well, makes sense. Nineteen films, at an average movie length of an hour and a half, means at the very least 1,710 minutes of sitting and watching a screen. That’s about 29 hours, or a part-time workweek. Factor in a movie-snack allowance and that’s already pretty hefty price to pay.

But thinking about it, it’ll be hard to escape the movies — let’s face it, they’ll be everywhere. Whether that will be on your Facebook feed or over the water cooler or buzzed about in the minutes before your biology lecture, it’ll be there. Do you want to be hopelessly uncool and out-of-the-loop when quotes from the movies are inevitably tossed around at beers with pals? This will be a very real concern for those afflicted with the chronic condition of FOMO.

VanDerWerff also raises the valid point that the DC-Marvel reveal only encompasses a slice of the whole amalgam that will be action films for the next few years. Releases from Fox (who own the rights to Marvel’s X-Men and Fantastic Four characters) and Sony (who own Spider-Man) haven’t yet been announced, and who knows what the inside of that Pandora’s Box will look like? It’s true, friends — we are on the brink of a plague of serious viewing anxiety. What to watch and when and where and for how much? Is it all worth the investment? Is it just another way that the big dudes are trying to reach into our humble little geek pockets?

Alack and alas, there’s not enough continuous space-time for contemplation of all the abstract details. What’s clear is that we’re about to consume unholy quantities of popcorn. 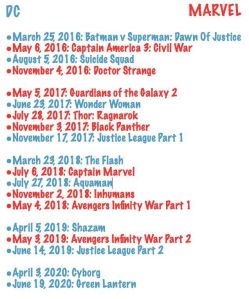 Where will you be in six years? Me, I’m a simple person — really, I’ll be happy if I can finally cook something other than ramen in 2020. But DC has far loftier goals than I, apparently. For all of you visual learners out there, here’s a graphic plan of DC movie titles for the next six 365-day carousels of humble human existence. Which will happen if the world doesn’t eventually succumb to a zombie-ebola apocalypse, that is.

The full list, according to Warner Bros. press releases:

Deathstroke, Joker and Copperhead come together in a triple whammy as a nod to epic video-gaming experience Batman: Arkham Origins. The 2013 Warner Brothers action-adventure game was a smash hit, most certainly due in part to the presence of three whopping personalities who were set on deviously confounding Batman and his allies. Deathstroke, the aged, rogue fighter, and Copperhead, the maniacal, venemous gymnast, are joined by the ever-present and ever-scheming Joker — all in 6-inch format. Grab a piece of the action to keep for your very own this fall.

As dark and conniving as the alleyways of Gotham City.

Based on the 2013 Warner Brothers adventure/action video game Batman: Arkham Origins, this specialty realization of the bat hero is from the acclaimed Play Arts Kai line. As the Square Enix sector of the Play Arts line features improved articulation and slightly bigger sizes than conventional renderings of the character, this Arkham Origins figurine is the ultimate for the serious Batman collector.

A reflection of a more younger, precocious Batman, the Origins installment was key in the Arkham series, taking place several years before the events of the Arkham Asylum narrative. Re-create his crime-solving prowess in 8 inches for ready display.

(We also have Deathstroke from the same game — check him out here.)

Warner Brothers and Rocksteady Entertainment will be collaborating to release Batman: Arkham Knight this June, but you can preview and own the who’s who of the new video game as early as March. In Arkham Knight, you’ll control Batman as a band of supervillains unites to take out the Caped Crusader. See it play out in your collection with each of these characters — Harley Quinn, Arkham Knight, Batman and Scarecrow.

Keeping with the melancholic aesthetic of Arkham Asylum, the four heavyweights mean business in shades of grey and black, with hints of red. You can purchase the figurines separately, but where’s the fun in that? Preorder the set of four for this spring.

New Jonah Hex action figures have now been listed over at CmdStore.com. Featuring some really impressive likenesses of actors Josh Brolin, John Malkovich and, of course, Megan Fox, the figures stand about 6 inches tall and can be pre-ordered to arrive in May.

The film itself has been delayed a few times and there is some bad buzz surrounding it, suggesting that it might not be up to par with the kinds of comic book movies that have been released in the past few years. Naturally, I still look forward to anything from the DC Universe and that it’s chock full of cowboy goodness only sweetens the deal.

And you know what’s even better? Well, as a Montrealer, I’ve already been thrilled by the video game development that’s been on the rise here, but now I am ECSTATIC! GameFocus.ca reports:

Following their announcement of a new studio opening in Montréal, Warner Interactive’s president Martin Tremblay told us via a phone interview that the new Montreal studio will focus on developing games based on the DC Comics license.

You might not remember this but Warner formed a DC Entertainment branch last year to specifically make use of the DC Comics characters in television, movies, videogames and other media. Tremblay didn’t give us any additional details, however with movie projects surrounding Wonder Woman, Batman, Jonah Hex, Green Lantern and obviously Superman, let’s just say that the Montréal studios’ first project could be a very important one.

More and more Sideshow/Hot Toys collaborations coming in! And the newest one is a stunner: 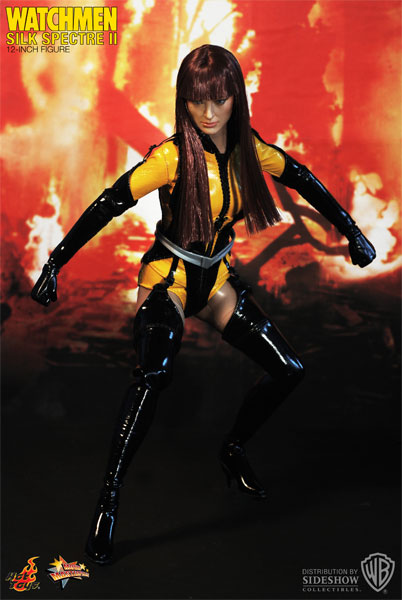 The new Hot Toys and Sideshow Silk Spectre II figure has joined the rest of the Watchmen figures and is the fourth character, after Dr. Manhattan, The Comedian and Rorschach, to be given the deluxe 12-inch treatment. This is a figure I was fortunate enough to see in its prototype stage when I was at 2009’s San Diego Comic Con and believe me, it looked great. The detail on the face is exquisite, capturing Malin Akerman’s features perfectly, and the outfit fits brilliantly. If you’re a fan of the film, the comic, the actress or just high-quality figures, this is a great choice.

Beyond being generally rad, here are the specs from the creators.