Back by popular demand, this meticulously detailed Ultra Magnus is ready for action. This classic Transformer will easily become the centerpiece of your collection. Takara has fashioned this 12-inch figure along lines of superb quality, staying true to Ultra Magnus’s iconic look while incorporating Japanese design elements to make an aesthetic combination as yet unseen.

Add this Masterpiece Series offering to your personal Transformers lineup today! Click on the image below to start shopping before they’re all gone.

Takara’s Transformers Classic line has already brought us fine, quality collector’s pieces that have inspired both awe and nostalgia. And now offerings from the Masterpiece series are definite must-have figures for serious, adult collectors, especially those with a fondness for now-vintage incarnations of the original Transformers.

Peep this 12-inch deluxe toy, the ultimate Masterpiece figure yet! The Ultra Magnus MP-22 cab utilizes the MP-10 mold and has a fully functioning and transforming trailer that forms the robot with armor, just like the G1 toy! Own the chief lieutenant of Optimus Prime in all of his futuristic, robotic, shape-shifting glory.

Ultra Magnus is more comfortable as a soldier than as a leader, but that’s kind of what we like about him.

TAKARA produces some of the best renderings of the most popular and classic characters from the massive Transformers franchise. Now they’ve brought in a new pair of Masterpiece Collection figures of Starscream and Optimus Prime that is sure to please die-hard fans of the robots on disguise. Here’s a look! 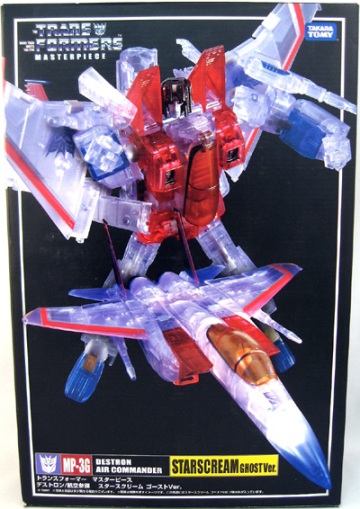 An intricate mixture of plastic and die cast, the almost completely translucent Ghost Starscream features a Gen 1-inspired color scheme. Extensively articulated, the figure is equipped with arm-mounted removable guns, and should be accompanied by decals, missile accessories, and a missile-rack display base configured to support both robot and jet modes; presumably this version will include the same switch-between facial expression feature found in Starscream’s non-spectral Masterpiece counterparts.

In Transformers: The Movie, Starscream seizes an opportunity to eliminate the badly-wounded Megatron, and is later, on Cybertron, amid pompous trumpet fanfare provided by the nonplussed Constructicons, crowned the leader of the Decepticons. Immediately afterwards, Galvatron, the reconstituted version of Megatron, arrives and matter-of-factly destroys the puzzled, crown-adorned Starscream with a single cannon blast. In the cartoon episode “Starscream’s Ghost”, the mendacious Air Commander, discovered by the fugitive Triple Changer Octane in a moldering Decepticon Crypt, returns as a semi-translucent specter. Starscream’s new insubstantial form enables him to take possession of Galvatron’s highest-ranking warriors, providing him with a unique path to vengeance.

This version of Prime is rendered in the lifeless shades of grey and black assumed by Prime’s chassis in the aftermath of the Decepticons’ assault of Autobot City. Arriving at a crucial moment, Prime plowed through multiple Decepticon warriors in the process of working his way to Megatron. In the ensuing hand-to-hand duel, Megatron, despite his initial boastful vow to destroy Prime with his bare hands, implements every oddly discarded weapon and piece of detritus he can find. When Optimus finally gains the upper hand, retrieving his gun, Hot Rod launches his own blundering attack against Megatron, enabling the Decepticon leader to use Hot Rod as a shield while he blasts Prime repeatedly with a discarded pistol. Prime finally delivers the decisive blow, crushing Megatron’s chest, although he succumbs to his own wounds immediately afterwards. As Perceptor delivers his sorrowful prognosis to the small handful of Autobots surrounding the ebbing Autobot leader, Optimus produces the Matrix of Leadership, bestowing the fabled artifact to the reluctant Ultra Magnus.

Much like Masters of the Universe, Transformers is one of those things I was just too young to get into. Plus, I was devoting my time to a variety of Disney shows. And Batman. In fact, mostly Batman. So when something new comes through the door here, I’m usually pretty clueless about what kind of item we’re dealing with. I know that some are deluxe and that this is a “Masterpiece” Takara import, but for the rest of the description, I think I’ll let the distributors do the talking.

Intended to reflect Ultra Magnus’ core appearance without the battle armor, the MP-02 Ultra Magnus utilizes the MP-01 Convoy/Optimus Prime mold and is similarly accompanied by a rifle, an energon axe, Matrix of Leadership accessory, and Megatron gun mode. Ultra Magnus is cited as a disciplined, varyingly self-doubting soldier with unsurpassed courage. In Transformers: The Movie, Optimus Prime passed the Matrix to Ultra Magnus, who accepted the fabled artifact reluctantly. Unfortunately, Ultra Magnus’ subsequent, brief tenure came to a crunching halt when Magnus was unsportingly waylaid by a swarm of Sweeps on Junkion.