Fans of the huge (and growing) DC Universe action figure line can now pre-order the nineteenth series of the 6-inch heroes and villains. They’ll be shipping either at the end of this year or the very beginning of 2012, but either way, you can take a look at what’s on offer right here:

With a S.T.R.I.P.E. Build-a-Figure piece included with every figure, you can pre-order Sandman, The Atom, Hawkman, Lord Naga, Magog, and Stargirl and expect them to ship out the moment we get them in! As usual, they’re a great find for anyone who feels their favourite DC Universe character hasn’t gotten their fair shake in the wide world of action figure awesomeness. 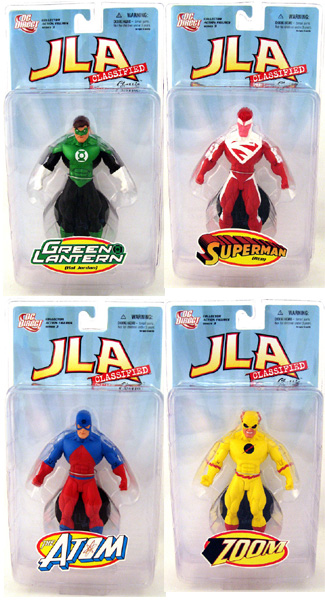 Green Lantern (Hal Jordan), Superman Red, Zoom and The Atom make up the third series of the Justice League of America: CLASSIFIED collection. They join the likes of Batman, Wonder Woman, Superman and Martian Manhunter. It’s a great 6-inch collection that brings together some truly classic characters and, beyond that, features the smooth sculpting and comic-styled design that have been the hallmarks of DC’s figures in the last couple of years.

Also from DC, you can now pre-order December’s 10-figure Kubrick collection! Celebrating the last month of DC’s 75th Anniversary Year, it brings together a bunch of Batmen and a few of his allies and enemies in one awesome set.