Sonic, Super Sonic, Amy and Tails make up this collections of Sonic Classics, perfect for any fan of the franchise looking to beef up their lineup. Check this out!

The figures stand about 3 inches tall and they all look great, perfect representations of the characters you know and love from the games, the comics or even the shows. Fans can also find a ton of other items, including plush toys, in our Sonic section.

Boasting 12 points of articulation and a smooth metallic finish, the 10-inch Deluxe Metal Sonic figure is one that should delight fans of the speedy blue hedgehog and his franchise. 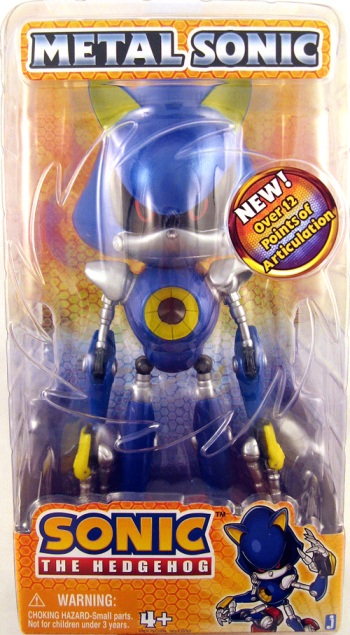 He’s one of the new Sonic figures we’ve gotten in-stock and ready to go, joining a bunch of 3- and 6-inch figures including mini vehicles, Silver the Hedgehog, Knuckles (super poser and 3-inch) and Shadow the Hedgehog, plus many, many more. They’re all from Jazwares, who have been the leading provider of all things Sonic in recent years, producing high-quality items that capture all the adventure and character of the massively popular and long-lasting series. Check ’em out!

But wait! There’s even more good news for fans, back from E3. Remember this from February?

Well, it seems like Sega’s almost ready to send it our way. Here’s the report from Pcmag.com! 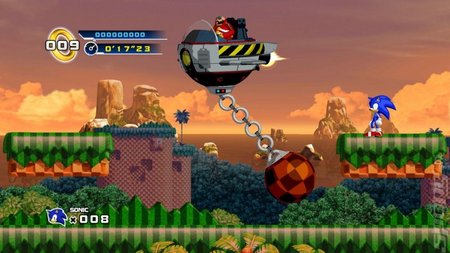 “Sonic 4” is throwback to the 16-bit Sonic games that helped the Genesis compete with the Super NES in the early to mid 1990’s. There aren’t any silly side characters, no werewolf transformations, or black Sonic clones with guns. Instead, the game was remarkably simplistic and quite refreshing.

Gameplay is classic Sonic. In our hands-on time with the game, we found it remarkably similar to the original “Sonic the Hedgehog.” Sonic plods along until momentum is gained, sending him whizzing through loops, over hills, and other familiar Sonic locales. The 1080p HD graphics are appropriately bright and cheery, and the music is delightful.

“Sonic the Hedgehog 4: Episode 1” will be available in late summer for the PS3 and Xbox 360.

Exciting news for Sonic fans as Sega yesterday revealed that the beloved blue hedgehog will be returning to a 2D environment in a new release next year.

The game, which has the development codename ‘Project Needlemouse’, will satisfy the clamouring of the thousands (okay, maybe hundreds) of fans disappointed by Sonic’s 3D outings such as Sonic Adventure on the Dreamcast and the more recent Sonic Unleashed, released last year.

The news was confirmed by Sega associate brand manager Ken Balough, speaking to Gamespot, who said:

“Old-school Sonic fans have long asked to see Sonic return to a more 2D style of gameplay. Many liked the daytime stages in Unleashed but wanted to see a game that plays purely similar to the early games of the Genesis. Project Needlemouse is that critical first step that brings Sonic back to his 2D roots.”

The full interview can be read here. There’s also a Needlemouse website floating around featuring some decidedly Sonic-looking landscapes, though the disclaimer running along the bottom suggests this is the work of a designer looking to flaunt his wares rather than an oblique marketing strategy on Sega’s behalf.

Sonic’s first outing was in the 1991 MegaDrive release Sonic the Hedgehog, which wowed gamers with its speed and frenetic gameplay. The fact that I’ve played Sonic 2 in only the last couple of months suggests that there’s definitely a market for more of the same.

Xbox Arcade and WiiWare have revived interest in the retro gaming market in recent years, and made developers realise that there’s still money to be made in playing up to gamers’ nostaligia. But this announcement is partly a reflection of Sega’s failure to make Sonic ‘work’ in 3D. Sonic fans have never had a Mario 64 or Mario Galaxy – a great 3D game worthy of such an iconic character – and Needlemouse makes it look even less likely that ever that they will.

And in toy news, we’ve just gotten the latest batch of Sonic the Hedgehog toys from Jazwares. Sega may have dropped out of the console race, but they haven’t stopped working on games or on building their most beloved franchise, which has meant that merchandising for Sonic games has managed to hit a high despite an age of nearly twenty years.

You can check ’em out over at our website in the Sonic section!

On the heels of our post about The upcoming Legend of Zelda game, and Grand Theft Auto: Chinatown Wars, we’ll continue our Nintendo theme with a look at some of the toys and collectibles we’ve got in our online store.

The Legend of Zelda is arguably Nintendo’s most epic franchise, a tale of stolen princesses, rogue magic and adventure in the land of Hyrule. It’s spawned over ten games so far, with more on their way, and we’ve got toys from every LoZ era. From plush toys to replica swords, we’ve got something for every fan! Plus, for a special treat, be sure to check out the Legend of Zelda albums for the sounds of your favourite games.

Definitely one for the retro fans, this vintage figure of Donkey Kong’s Pauline is a rare find, but represents some of the first merchandising Nintendo ever produced to support its North American releases.

Sonic the Hedgehog was originally a Sega property, but made the move to Nintendo when its original company gave up the ghost following the Dreamcast’s failure. Now new life has been breathed into the speedster and you can find some of the older figures here, or pre-order the upcoming Jazwares figures–shipping in May, June and July!

Super Mario and friends are the Big Names in Nintendo, the company’s signature characters. And Mario, Luigi, Peach, Toad and the others are all here in a number of forms: plus toys, trading cards, Gashapon minis, and even magnets of Mario’s original 8-bit form.