New from the well-loved Transformers: Age of Extinction line is Snarl, the last of their Dinobots to be released! Modeled after a Brachiosaurus, Snarl wheels and deals with prehistoric fierceness combined with machine toughness. Combining both translucent and opaque materials, his green and violet color scheme suits his character.

He is also unique in that he does not possess the “knight” look of other figures previously released in the Age of Extinction series — this guy is a cut beyond. He stands six inches tall and is part of the third wave of highly coveted Deluxe Class figurines. Your Transformers collection can’t be complete without this Deluxe Class figure, so order now! (And P.S.: We have Hot Shot, too!) 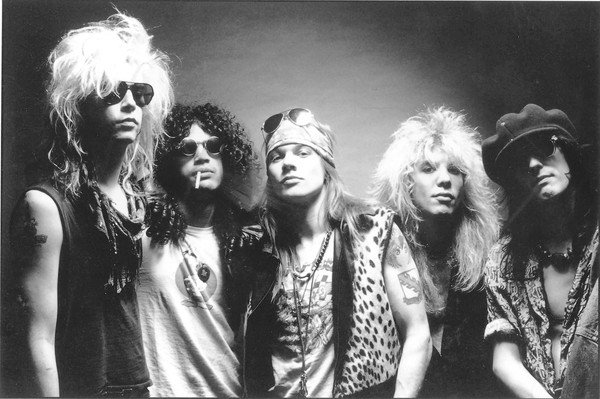 Los Angeles – Guns N’ Roses co-founder Axl Rose, through his publicist, announced Wednesday morning he will not attend the Rock and Roll Hall of Fame induction ceremony on Saturday in Cleveland, according to a letter received by the Los Angeles Times. Written under the greeting, “To The Rock And Roll Hall Of Fame, Guns N’ Roses Fans and Whom It May Concern,” Rose explained specifically why he was declining his induction into the Cleveland music institution.

The band, born in Los Angeles in 1985, was announced as an inductee in February alongside the Red Hot Chili Peppers, Beastie Boys and Donovan, among others, leading to instant speculation whether the five core members of Guns N’ Roses circa Appetite for Destruction would appear together for the first time since 1993. Guitarist Slash officially departed the band in 1996, followed soon thereafter by Duff McKagen and Matt Sorum (original drummer Steven Adler had left a few years earlier, as had Izzy Strandlin).

Rose retained the rights to the band’s name, and over the next decade devoted his time to creating the album Chinese Democracy, touring with a revived Guns N’ Roses, and defiantly dismissing any suggestion of a reunion with the original members of the band.

Since February, Rose has remained mum on his plans, even as guitarist Slash has spoken out in favour of a Rock Hall reunion — and acknowledging Rose’s antipathy. “He hates my guts,” Slash told Rolling Stone in early April. “It’s over a lot of different stuff; I don’t even know. There’s just no communication between us. I talk to Duff and Steven, but when it comes to old Guns N’ Roses, there really isn’t anybody that makes decisions.”

In the letter, Rose specifically criticizes comments by Adler, who speculated to Billboard magazine in 2007 that the band might reunite. Those comments were given by Adler while promoting his own Adler’s Appetite tour, which was timed to support his book, “My Appetite for Destruction.” “I want to finish what we started,” Adler told Billboard then, “and . . . with the love and support I got from those guys, I think we can (reunite). I’m gonna leave it up to Axl. That’s gonna be Axl’s call, and I love Axl and I know he’ll make the right call.” Rose, in the letter, calls Adler’s comments “reunion lies.” Continuing attempts to reach Adler have not been successful.

During a December 2011 sit-down interview with Rose after a Guns N’ Roses concert in Seattle, the singer had yet to decide his plans, but was uninterested in making a scene at the induction ceremony if he did decide to attend. “I think about it in terms of Marlon Brando getting up at the Academy Awards and talking about Indians . . . or when Michael Moore got up at the Academy Awards and said whatever about George Bush. People don’t want that associated with their awards shows, even if you have a big audience. In one way it might be right, but it usually backfires on whoever does it. So I really don’t want to spoil it for everybody else — and take the beating.”

Notably, Rose then laughed and cursed Jann Wenner, the founder, publisher and executive editor of Rolling Stone magazine — who also co-founded the Hall of Fame in 1983.

Are you looking for action figures of your favorite rock star.  We have a limited supply of rare and collectible figures in our store.  HERE. 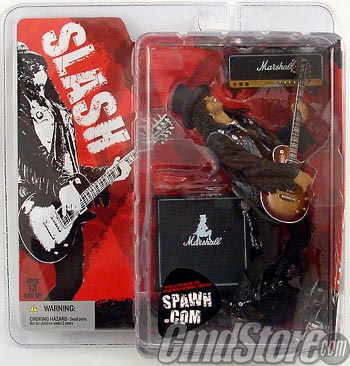 If you’re a fan of Guitar Hero, yesterday probably wasn’t your day. And if you’re not a fan, you still might have seen #RIPGuitarHero trending on Twitter and wondered what that was all about. Well, here’s your answer from CNN:

(Mashable) — The premiere plastic guitar game just flamed out. Activision, beset by falling sales, has decided to shutter the division that created “Guitar Hero” and its sequels.

It’s an ignominious exit for a title that was once touted as the first great game franchise of the 21st century. “Guitar Hero” was created in 2005 by indie studio RedOctane, in collaboration with Harmonix, which had previously found success with the “Karaoke Revolution” franchise.
“Karaoke Revolution,” where players plugged microphones into their consoles and were scored on the accuracy of their singing, was the first game to show a significant number of videogamers were interested in making “music.” RedOctane’s “Guitar Hero” proved they were equally interested in shredding a plastic guitar.

Activision purchased the franchise in 2006 for $100 million; to date it has shipped more than 25 million units for a roughly $2 billion ROI. “Guitar Hero III: Legends of Rock” made $1 billion on its own. Harmonix went on to publish the highly successful “Rock Band” franchise, which added drums, microphones and keyboards to the plastic guitar mix.
How the mighty have fallen. The holiday season was a disastrous one for the music game genre. First Harmonix was sold by Viacom to a consortium of shareholders; the terms were undisclosed, but it was reported to be a fire sale. MTV Games, which collaborated with Harmonix on “Rock Band,” was shut down. “Guitar Heroes: Warriors of Rock,” the sixth title in the series, received lackluster reviews and even more lackluster sales.

Activision posted a $233 million net loss for the fourth quarter. Its decision to lay off the 500-person “Guitar Hero” division was, Activision said in a press release today, “due to continued declines in the music genre.”

So what stopped the music? The first culprit: oversaturation. There are just too many games competing in the genre (“Band Hero” and “DJ Hero,” anyone?), with too many pricey controllers. A “Warriors of Rock” guitar bundle will set you back $80. Considering many of the controllers do not play nice with similar games, that’s a lot of dough to drop on pretend jamming.

Secondly, there’s the novelty factor. The dynamics of the game changed little from one title to the next, despite the introduction of innovations such as a touch-sensitive slide bar on later guitar controllers. At a certain stage, users are going to be more interested in picking up a real guitar. The series also felt like it was running out of great rock anthems for users to emulate. Reviews of “Warriors of Rock” complained that the set list seemed dull and full of synth-heavy tunes.
Finally, of course, Activision isn’t going to stop actually selling “Guitar Hero” titles any time soon. If you’re interested in becoming a maestro of the pretend Gibson, you can still pick up the “Guitar Hero” back catalog and buy extra songs online. “Guitar Hero” and “Rock Band” may one day be seen as a classic party game, pulled out of the closet at holidays and special gatherings, the way we play Monopoly or Scrabble today. Maybe it’s time you introduced Grandma to the plastic guitar.

If you’re one of the many saddened by these developments, you might want to check out the last couple Guitar Hero items we’ve got in-stock. Slash, Lars Umlaut, God of Rock and more await!

On the heels of our Band Hero post, here’s a look at the Guitar Hero figures we’ve got in stock! From Slash to Lars Umlaut, Johnny Napalm to the God of Rock, we’ve got a ton of figures and variants that fans of the game are sure to love.