Fine toymakers Takara have brought us something new and exciting that’s sure to delight even the most hard-to-please collectors. Here’s the Transformers Masterpiece Series Ratchet MP-30, a six-inch figure rendered in only the most meticulous detail.

Transform him to a red-and-white ambulance, only fitting for the chief medical officer of the Autobots. Click on the image below to get started.

TRANSFORMERS: Dark of the Moon’s fourth wave of Deluxe Class figures is here and fans of the film or the entire Transformers universe are in for some great items. 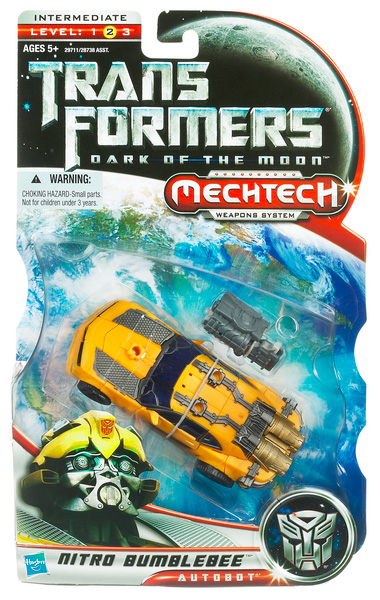 The figure up there is NITRO BUMBLEBEE and he’s joined in the fourth wave by SPECIALIST RATCHET.

These two are soon to be joined by Wave 5, which will include AIR RAID, TOPSPIN and DARK STEEL, all of whom are available for pre-order now!

The Sony Playstation and Playsation 2 seemingly came out of nowhere to trounce Nintendo in the 90s and early 00s (the balance has since shifted again with the unexpected success of the Wii) and brought a ton of new and innovative games with them. One such game was Ratchet & Clank for the Playstation 2. Here’s a quick description from the wiki:

The game follows the exploits of Ratchet (a bobcat-like creature known as a Lombax that is very handy with tools) and Clank (a diminutive sentient robot that befriends Ratchet) as they save the galaxy from several evil forces.

Sounds like a pretty average premise for a game, but it was the innovative worlds, characters and weapons that won the hearts, minds and thumbs of the gaming world. The game became a massively successful franchise and has come to include downloadable mini-games and character spin-offs on top of the full-length console adventures. Really, given the popularity of it all, it’s almost a surprise that it’s only now that DC Direct is releasing action figures based on the game! Check out the Ratchet & Clank collection over on our website to see the rest of the items (including the series’ villains and a new look for Ratchet), but here’s one now:

For anyone not yet into the game, what are you waiting for? Here are the links to grab it over at Amazon.com!
Ratchet & Clank Future: A Crack In Time