From the Old Republic MMO, DARTH MALGUS joins the ranks of the Sideshow Collectibles Star Wars line as a premium format figure. He’s built at the 1:4 scale and wears some impressively detailed armor, a custom-tailored fabric caps and his signature red lightsaber. A commander of the Imperial Army, he cuts a terrifying figure and casts a long shadow on the events yet to come.

If you’re a fan of the game or the Expanded Universe titles in which he is featured, you should definitely be sure to pre-order this guy now! He ships out in July! 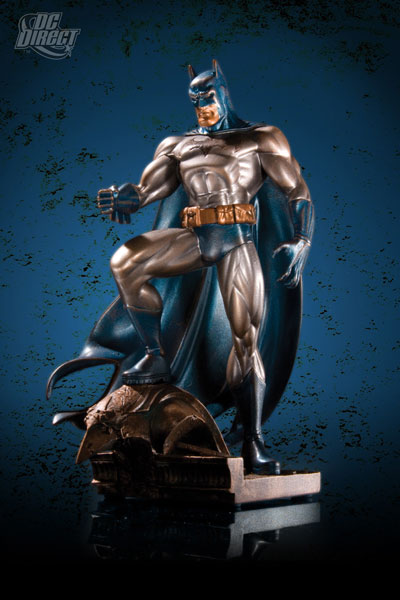 Based on the sold-out, full-sized statue designed by DC artist JIM LEE, this 7-inch statue of Batman over Gotham is painted in a faux-bronze finish that makes it an amazing centrepiece despite its size.

The cold-cast porcelain statue is hand-painted, measures approximately 6.75″ high x 3.75″ wide x 4.5″ deep and is packaged in a 4-color box.

Naturally, this one is a limited edition so be sure to get your hands on it ASAP! It’s a pre-order, so you can act now and expect delivery when it ships out in February 2012.

Lara Croft slides into action in this 19-inch Sideshow statue designed by the legendary Adam Hughes. The Tomb Raider heroine wears her signature outfit (made of real fabric here) and wields a pistol against an unseen foe. It’s an amazing piece and one that you’ll definitely want to get your hands on if you’re a fan of the franchise. Plus, it doesn’t hurt that there’s a new Tomb Raider game coming out with a totally new Lara–never a better time to snag what’s about to become a classic.

They’ve just arrived in stock and will be sure to please die-hard Star Wars collectors. It seems as though there is really a never-ending supply of Star Wars items (figure, statues, lightsabers, etc.) coming down the pipeline and that’s exactly how fans like it. You can grab these guys as individual figures or as a complete set of six. You can also pre-order the next wave (including a new General Lando!), which ships in April.

Whether you prefer your Juggernaut with helmet, without or prefer to have both, our Marvel Select collection has got you covered!

Joining a huge collection of figures including Black Cat, the Thing, Abomination, Captain America and many, many, MANY more, Juggernaut stands an impressive 8 inches, most of these being leather, muscle and some extreme veininess. In addition to featuring the always-amazing sculpting by Gentle Giant, Juggy also boasts 16 points of articulation! You can pre-order him now for shipping in January 2011!

Magneto (with helmet) is the latest addition to Marvel’s premiere figure line, Marvel Select, a collection that brings out the best in Marvel’s heroes and villains via high-quality individual figures.

Sculpted by Gabriel Marquez, this figure captures Magneto standing tall and proud above the ruins of the Xavier Institute (and the body of a fallen enemy!), looking as smug as you might expect from one of Marvel’s greatest supervillains ever. With ambitions to eradicate the entire human race in favour of the highly-evolved mutants, though, it’s unlikely Magneto intends to spend much time resting on his laurels, so this victorious pose won’t last long!

Made by Diamond, this figure can be pre-ordered now and ships in September! You’ll want to hurry, though, because the helmet-free variant has already sold out!

A cult favourite and an man who successfully turned from a dangerous criminal past to a the life of an actor known worldwide, it’s actually surprising that a man with as awesome a career and as intense a look as Danny Trejo is only now being immortalized as an action figure. But it seems that Robert Rodriguez’ upcoming MACHETE is the movie that’s finally done the job, as you can see in this brand new pre-order from NECA…

The film, based on one of the fake trailers from Rodriguez and Quentin Tarantino’s GRINDHOUSE, is a tongue-in-cheek homage to grindhouse films and the gore, violence and sex of that cinematic age. The figure stands about 6 inches tall and comes bearing the twin machetes that are the character’s signature weapon and namesake. It ships in October and can be pre-ordered now!

For those looking forward to MACHETE, you may have see the awesome new posters they’ve released in the marketing build-up for the film, but in case you haven’t, here they are in all their retro glory.