Next in a series known in collectors’ circles for its attention to detail and minute articulation points come four new figures! Obi-Wan Kenobi (pictured below), Tie Pilot, Yoda and Clone Trooper Sergeant are six inches tall and are essential to own in order to achieve the complete Black Series ensemble.

Show off your toys with the help of their sleek, black window box packaging designed especially by Hasbro to house their brand-new offerings. 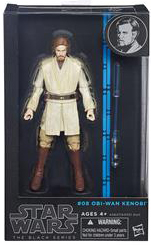 Do you remember the first time you saw Episode IV: A New Hope of the quintessential Star Wars saga? If you’re a die-hard follower of the continuous struggle between light and dark, you’ll fondly recall the Rebel Alliance’s operatic struggle to destroy the Galactic Empire’s Death Star, entangling Skywalker, Leia, Obi-Wan and some very handy droids in a drama of astronomical proportions.

As the next selection in Hot Toys’s Movie Masterpiece Series, Vader bursts onto the scene in full 13-inch form. Naturally he is in 1/6 scale with film-accurate detail and craftsmanship, complete with his trademark breathing sounds and LED light action on his lightsaber and belt. He’s accompanied by an equally detailed Interrogator Droid and can be set up using the included figure stand.

Preorder the Sith Lord now to own in September of this year!

Star Wars fan? Prepare to drool as we show you some very, very rare new figures in two sets.

These guys are only available as cases of 12 and each figure is about 3.75 inches tall and features some awesome articulation and weaponry. Both sets are incredibly rare, too, so you should definitely snag these while you can if you’re a collector!