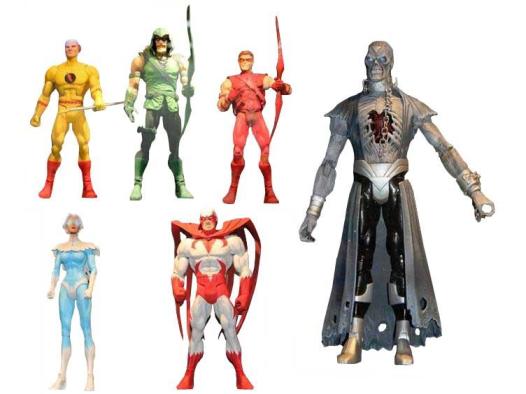 The 20th series of DC Universe figures is an interesting one because, this time, the Build-a-figure might just be the real star. If you’re usually a picker, you might actually want to consider snagging the whole set, because building a sweet, over-sized NEKRON is pretty cool. As for the carriers of the Nekron-pieces, you can grab Green Arrow, White Lantern Flash, Reverse Flash, Hawk, Dove (Dawn Granger), Red Arrow and Sinestro! They’re all about 6 inches tall and look pretty awesome–especially the new Green Arrow, whose Flashpoint look is pretty great.

It’s here! The 19th series of DC Universe figures has arrived. You can find Sandman, The Atom, Hawkman, Lord Naga, Magog and Stargirl in this new wave and they’re all looking great at 6-inch figures. As ever, collect them all and you can use the included parts to make the build-a-figure, which is S.T.R.I.P.E. this time around!

And you can already pre-order the next series, which includes Green Arrow, White Lantern Flash, Reverse Flash, Hawk, Dove (Dawn Granger), Red Arrow and Sinestro, plus the build-a-figure NEKRON for fans of the Lanterns. It ships in January, but you can snag it now.

The latest BLACKEST NIGHT figures have arrived! Series 5 is comprised entirely of Black Lanterns, dark versions of the heroes we know and love and a terrifying supervillain bent on a galactic war.

Each one is about 7 inches tall and looks just as vicious as you might expect, ready to bring down what remains of the GL Corps and the Justice League one hero at a time! Here’s the complete set of figures now available and in-stock, a great way to bring the battle for the universe to your very own toy shelf!

DC Direct’s Blackest Night collection is still growing even as we all look towards Brightest Day. The fifth series is now available for pre-order and will be shipping in August of this year, just as the high from Comic Con International in San Diego begins to wear down. This series is comprised of four 6 or 7 inch figures and features dark, Black Lantern versions of Batman, Deadman, Hawkman and Nekron, who, like Deadman, goes fundamentally unchanged. As per usual, each one of these guys comes with a Black Lantern ring that you can use to unlock whatever dark powers you feel you deserve that day. You can grab the figures individually or as a full set of four. Pre-order now and they ship next month.

And if you’re looking for more Blackest Night goodness, then you might also be interested in pre-ordering the other GL figure shipping next month: the Deluxe Sinestro Corps’ Mongul.

Standing a whopping 9” to tower above the other figures and packaged in a double clamshell, this special item is one that fans of the series should definitely look out for to fill out their collections. Mongul ships in August, as well, but it a stand-alone figure outside any series.