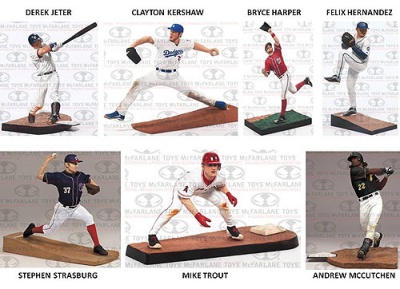 Derek Jeter, Clayton Kershaw, Bryce Harper, Stephen Strasburg, Felix Hernandez, Andrew McCutchen and Mike Trout make up the 31st series of McFarlane’s awesome MLB Baseball collection. As usual, the sculpting is immaculate, a testament to the incredible skills of the folks at McFarlane, and the poses are dynamic and lifelike. If you’re a fan, pick your favourites from the line-up! And if you’re a huge fan, grab the whole set. Just click the pic above!

We’ve got quite the line-up headed your way if you’re a fan of McFarlane’s impressive baseball figures. Alex Rodriguez, Josh Hamilton, Matt Kemp, Starlin Castro, Adrian Gonzalez, Thurman Munson and Cliff Lee make up the players in this series, with a few variants and colours available as part of the line. Each one is about 7 inches tall and they all look fantastic, highly detailed with some amazing player likenesses. They stand on accurate renditions of the diamond’s turf and the accessories you’d expect from the players. Grab the whole lot and the bases fit together to form an awesome action figure playing field.

He’s part of the 29th series of McFarlane Baseball figures and looks incredible, tattoos and all. As usual, the figure is about 7 inches tall and comes with accessories and a base modelled after the turf. 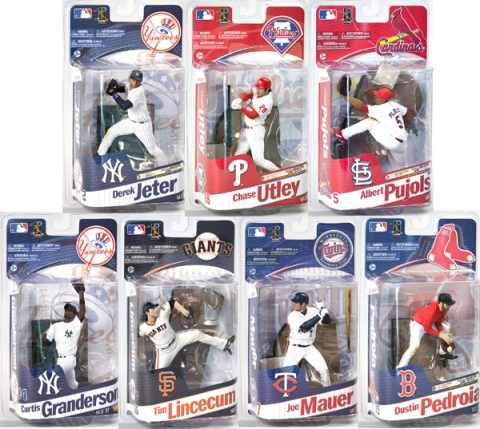 Each one stands about 6 inches tall and looks great, featuring the kind of impressive likenesses that McFarlane have made their speciality along these many years. As usual, you can pick and choose if you’ve got any favourites or just snag the complete set to make sure your collection has it all. 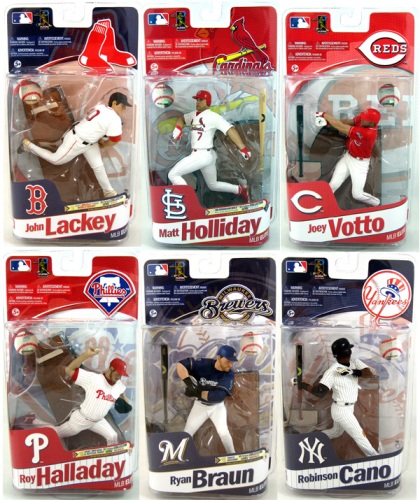 You can also get your hands on this:

Nolan Ryan, Curt Schilling, Willie McCovey, Carlton Fisk, Rickey Henderson and Lou Gehrig make up the eighth series of McFarlane’s COOPERSTOWN series. A collection of greats, you can snag ’em individually or as a set.

Series 26 of McFarlane’s celebrated Baseball figure line has just been released and is now available individually or as the full set of 6. The line-up boasts talents and stars like Evan Longoria, Victor Martinez, Prince Fielder, Kevin Youkilis, CC Sabathia White and Tim Lincecum.

And if baseball isn’t your sport, well, I’ll also make mention of the upcoming 25th series of McFarlane’s 6-inch hockey figure collection. No pictures of it yet, but the line will include Dustin Penner, Henrik Sedin, Marian Gaborik, Nicklas Backstrom, Patrick Kane, Sidney Crosby, Scott Gomez and Phil Kessel.

As per usual, you can order those as individual figures, or as a complete set. Or, if you’re a serious collector, grab the sealed package of figures to make sure you get your hands on some of the awesome variants sure to be found in every McFarlane series.

Baseball heroes Tony Gwynn, Carl Yastrzemski, Joe Morgan, Babe Ruth and Thurman Munson have already been immortalized in almost every way possible, from places in Cooperstown (the baseball Hall of Fame) to spots in the record books, but now McFarlane has made them into collectible figures that feature likenesses impressive enough to make them a truly worthy tribute to the greats.

Here’s a look at this, the seventh series from McFarlane.

Like the aforementioned NBA series, this group is also subject to the Collector Level distribution, which means that some are rarer than others. Use this chart to figure it out! The figures can be pre-ordered now, but ship in March!

I’ve been collecting action figures since I was a kid. I started out with Batman, expanded into the DC universe and would later go into a number of fandoms from Hellboy to Pirates of the Caribbean to Legacy of Kain. One thing, though, that I never understood was the passionate love for figures of athletes. Never a sports fan, I always thought it seemed strange to collect figures of real people: what was the charm in having something smaller than life without any fantastic elements at all?

Clearly, I was mistaken. As I would later learn, sports figures are among the most popular out there and are well on their way to totally replacing trading cards. Who knew? Over in our sports section, you can check out MLB, NHL, NBA and NFL figures from the folks at McFarlane. But first, here’s an item we just added to CmdStore…

This boxed set honors the Yankees “Core Four” — Derek Jeter, Andy Pettitte, Jorge Posada and Mariano Rivera — for winning five World Series titles with the New York Yankees between 1996 and 2009. Each player played a significant role in bringing home the title for the Yankees. Catcher Jorge Posada batted .333 during the 1998 World Series and blasted a home run in Game 2. Pitcher Mariano Rivera was the 1999 World Series MVP. Derek Jeter won the 2000 World Series MVP after batting .409, hitting two home runs, a triple and two doubles during the five game contest. Finally, Pitcher Andy Pettitte had the unique distinction of picking up the clinching win in all three rounds of the 2009 postseason.

We’ve just gotten a shipment of NBA Legends figures from McFarlane SportsPicks! It’s the fifth series of the 6-inch Legends collection and fans will be pleased to see some of the greats get their dues in this massively popular line of figures.

Series 4 features Magic Johnson (2), Dan Majerle, Joe Dumars, Karl Malone 2, John Havlicek and Hakeem Olajuwon. Each one is brilliantly sculpted in a pose that captures all the action of an NBA game and comes with a base and ball.

We’ve also got the new Collector Level assortment cases of NFL figures, a new series of NHL figures and NLB figures on their way! If you’re a fan of the McFarlane SportsPicks collection, you’ll definitely want to take a look.

They join dozens of other 6-inch toys already released, plus the 3-inch and 12-inch collections, plus the exclusives and box sets. For fans of the game or fans of the toys, this new set is sure to add a real kick to your collection.

And even if football isn’t your bag, there’s no shortage of items for fans of baseball, hockey, basketball, golf and even NASCAR (it’s kind of a sport, right?). You can take a look at the selection available over at our online store by clicking the banner below!