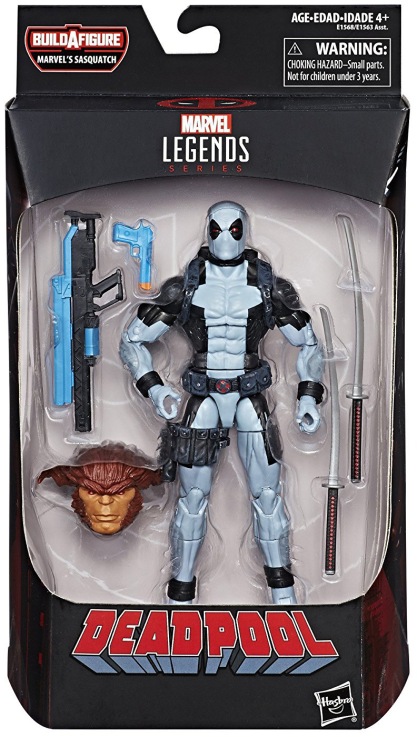 We know that you, like us, probably want to start 2016 off right. What better way to do that than with the first Marvel Legends Infinite release of the year? Check out the Spider-Man Absorbing Man series, featuring seven brand-new figures rendered in six-inch format.

Choose from Hasbro’s interpretations of Ben Riley Spider-Man, Spider-Gwen, Jack O’ Lantern, Female Beetle, Classic Venom, Speed Demon and Morbius. Better yet, grab all seven for a special price you can’t beat. These guys will start shipping out in the first quarter of this year, so get your pre-order in now!

This new addition to an already hotly anticipated series is about to change your collection in a way never seen before. We’re excited to introduce the Marvel Legends Ant-Man Exclusive Series Ant-Man Black Costume Variant.

If you’re already set with the Ant-Man Build-A-Figure series, you won’t want to miss out on this guy, featuring the beloved Ant-Man but with a special color-way and outfit that’s never been seen before in this format. The ultimate Marvel Legends collector will want to snap this up ASAP! Don’t delay — and catch yourself up on the movie for all those water-cooler conversations!

Are you ready? We know we aren’t the only ones who have been waiting with bated breath for this new series of figures from this comic empire! Here is the Marvel Legends Infinite Dr. Strange Build-A-Figure Hulkbuster series, ready to captivate and awe. You’ll be the envy of all  your collector pals if you’re among the first to cop this coveted set.

This wave features none other than Dr. Strange, Blizzard, Valkyrie, Thundra, Marvel Now Iron Man, War Machine and Vision, a whopping seven figures that can be put together to build the indomitable Hulkbuster. As always, we’re providing our rad customers with a great package price when you buy all seven together. Can’t beat that!

Who you gonna call? Hulkbuster!

With a combination of well-known Spider-Man figures and yet-to-be-released Marvel characters, this fourth wave of Spider-Man Marvel Legends Infinite figures is a sight to behold. Whether you can’t wait for Scarlet Spider because the Clone saga is your cup of tea, or if you’re eagerly anticipating Superior Venom because you couldn’t get enough of that Superior storyline, we’ve got something here for you.

These seven new gals and guys will be the new centrepiece of your Marvel collection, especially considering that if you cop all of them, you can build the massive Rhino! You can purchase Ghost Rider, Kraven, Misty Knight, Scarlet Spider, Superior Venom, White Tiger and Chameleon separately, or better yet, take advantage of our package deal and save coin at the checkout.

Seven is the number of perfection, after all.

That’s right, pals! What was an exclusive preorder is now available to own. From Marvel and Hasbro come Classic Spider-Man, Mae Parker Spider-Girl, Spider-Man 2099, the Ultimate Spider-Woman, Anti-Venom and Daredevil. Get on these rad figures quicker than a fat kid on an M&M. (I’m talking about myself, obviously.)

And of course, the crowning feature of this delectable set of collectibles is the magnificent Hobgoblin you can build from them with your own lil’ paws. Check ’em out below — aren’t they positively nifty?

At last, our loves have come along. We were biting our nails waiting for this killer wave of new Marvel Legends figures based on the Avengers, and now they can finally make their way into our paws — and yours! Six-inch versions of Age of Ultron Captain America, Age of Ultron Iron Man Mark 43, Age of Ultron Hulk, Spider-Woman, Helicat and Batroc are up for grabs here, with the ultimate prize to be assembled. That prize, of course, is the formidable Thanos, resplendent in a costume of gold and obsidian.

You really can’t sleep on these guys if you’re truly stoked on the Marvel Legends lines, and no collection can be totally complete without them. So get on over to CmdStore.com and order ’em up! And if you grab all six together, you won’t miss out on our irresistible package deal, featuring a special, discounted price. Let’s go.

At last year’s San Diego Comic-Con, forthcoming waves of the Marvel Infinite series were revealed. This third Spider-Man wave has been highly anticipated, especially because Hasbro devotees have been requesting a Build-A-Figure Hobgoblin to no avail — until now!

At the time, the SDCC only announced half of the Infinite Spidey six-inch figures, but now all six of them are available for pre-order. Marvel and Hasbro are delivering what we’ve asked for, and along with Comic Based Spider-Man, Mae Parker Spider-Girl, and Spider-Man 2099, the Ultimate Spider-Woman, Anti-Venom and Daredevil can be all yours. These guys and gals will ship out next month, so don’t delay.

Grab all six of these Marvel Legends Infinite figures to build the Hobgoblin at the top.

In the new year, the Marvel Legends Infinite series will premiere seven previously unseen six-inch action figures based on the outrageously incredible Avengers. Since 2002, Marvel Comics has used the Legends line to bring beloved and infamous characters alike to three-dimensional form. And much like the other series released since 2005, each figurine in their Avengers roster comes with a small piece to build a bigger figure — as if there already wasn’t enough incentive to snap them all up! Known in the community as the “Build-A-Figure” feature, this line will include all the pieces to make a modern Odin.

This is the first wave of the Marvel Legends Infinite Avengers, previewed for the privileged present at the San Diego Comic Con. Order them separately (Sentry, Scarlet Witch, Thor, Machine Man, Iron Fist White Costume, Classic Hawkeye and Captain Marvel) or take advantage of our package deal and purchase the whole set, pictured below. Own a piece of the Avengers legacy and weave the story into your own collection!

The first wave of Avengers from the Marvel Legends Infinite series is coming your way in early 2015.