Everybody’s favorite Italian plumber is back! Consider the Good Smile Company’s Nendoroid Mario, a six-inch figure set with all the fixin’s. It’s like he’s real with his varying smiling and serious facial expressions, and if that isn’t enough, you can jump right into a scroll-screen world of your own with the added coin, block and Super Mushroom accessories! “Dash” parts for when he’s running and “brake” additions for when he stops are topped off by the included background display.

“Bad guys” Buzzy Beetle and Boo can be used to re-imagine all of your favorite scenes from the SNES days! As a bonus, crossed-arm parts for the Nendoroid Luigi are included so you can display them together easy as pie. With this set, you’ll truly be all set.

It’s-a Mario, and all of his friends, too! Get ready to decorate any “blah” space with this poster based on the aesthetic and characters of the legendary Nintendo game Super Mario World. From Boo and Goomba to Bowser and Princess Peach, the gang’s all here and set to add a dose of color to your world.

This poster from Pyramid America measures 24 by 36 inches, sure to make the perfect centerpiece of any hideout. Hop into the nearest green warp pipe and pick one up!

Mario seems to get all of the attention at times. His bright red garb and lovably pudgy form have inspired waves of nostalgia and fondness in more than one generation of gamers. But what about his green-outfitted counterpart, the swift and quirky Luigi? Tamashii Nations/S.H. Figuarts totally get that this world needs an equal dose of Luigi as it does Mario, and they’ve knocked it out of the park with this new playset.

Complete with brick block and red shell accessories, the four-inch Luigi figure also comes with interchangeable hand parts to hold the shell. An exclusive display stand with support arms allows the Big L to be displayed as he deserves to be. Precise articulation allows him to be used to recreate scenes with the S.H. Figuarts Mario, also available on CmdStore.com.

Okay, so apparently Charles Martinet (the voice of Mario, Luigi, and other characters from the Nintendo franchise) has an Instagram account where he carries around action figures and does voice-overs for their real-time adventures. And we can’t stop chuckling.

In what could arguably be the most awesome crossover battle ever, Mario sees himself confronting none other than Darth Vader. And he doesn’t stop there — Mario and Luigi consort each other over a boiling pot of soup, encounter horses on the beach that they mistakenly identify as cows and become replacement juggling balls for a street performer.

Follow our man Charles here and let the hilarity ensue.

So what do these three things have in common? Recall cherished memories of third- and fourth-generation gaming consoles like the NES with this brand-new wave of figurines inspired by the Super Mario and Donkey Kong franchises! From Jakks Pacific comes the World of Nintendo series, and they’ve stocked their lineup with a bevy of adored characters. From Mario to Yoshi to Kong, these figures range in size from 2 to 6 inches. Wave one will be available for shipping as soon as November, so preorder now!

Still beaming that same smile after all these years. Mario, you’re a gem. 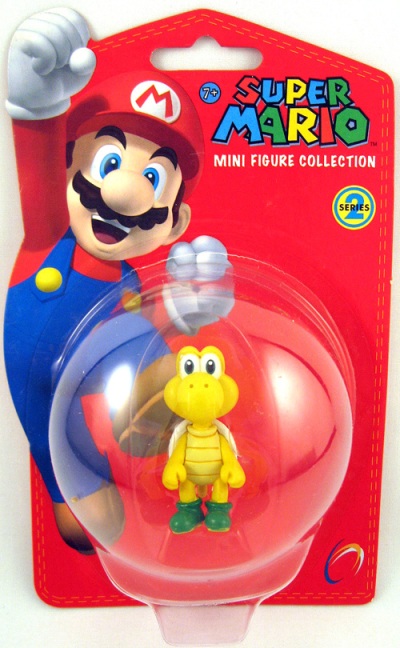 Koopas have it rough. Like Shyguys and Goombas, they almost never get their story told and usually end up on the wrong side of Mario’s boot, fireball or flashing, invincible body. And now, with today’s TeeFury shirt, they’re about to get kicked…again. So grab the figure above, snag the t-shirt below and join the Koopa Troop– they could really use some help.

If you’re a gamer, then you’ve already met these guys, but SomethingAwful breaks them down so well, that you just can’t help but feel vindicated in every button-mashing, controller-throwing rage.

There is a fine line between enemies that present a challenge and those that are simply annoying. Actually, that’s a lie. The line is pretty wide. Think about the gap between our fantasies when we first heard about motion controls and the horrible reality that came to pass. It’s that wide.

Some enemy archetypes have never been fun in any form, yet they keep popping up. Why? Maybe they’re easy barriers to put up between the player and the finish line, prolonging the playtime without enough consideration for the quality of the experience. Or maybe some developers just hate us.

Either way, games have been around long enough for us to collectively know better. Let’s get rid of these bad guys for good.

You’re hitting a dude, and he suddenly reappears somewhere else. Great. You know what that adds to combat? Probably not strategy. Probably not excitement. Definitely a few moments of finding him once again, possibly having to then walk across the screen for a few not-action-packed seconds, hoping he doesn’t teleport again.

This is made worse when the teleporting enemy has a wind-up animation which renders him temporarily incorporeal. Your options are to sit tight while he wastes more of everyone’s time or wail away at his invincible head out of pure frustration.

Option 1: The guy with the huge shield has a weak spot that you can attack from the front. His feet are sticking out. He has a conveniently open portal in front of his face the size of a tuna can. Whatever. He will otherwise be invincible, and the whole time you’re plinking away at the tiny vulnerable point, you’ll be thinking about how weird it is that he didn’t cover himself all the way.

Option 2: You have to get behind the guy with the huge shield and hit him from behind. Every single time. A bad guy that was presumably tossed into the mix to make things interesting has only added one more predictable and creatively restrictive element to combat.

If we’re going to have dudes with shields, make the shields smaller and require bad guys to dynamically move them in front of attacks as they maneuver in battle and engage us in other ways.

Robo-frogs and robo-mosquitoes in Daikatana. Pygmies in Diablo 2. Duke Nukem Forever’s impregnators. Has anyone, anywhere, at any time, enjoyed fighting a swarm of small fast-moving enemies? No. Of course not. These are the video game equivalent of a laser pointer flickered across the ground in front of a cat. Only, somehow, more demeaning.

“You have to be kidding me. Now I have to hit him again? Why? Will he just get healthy a second time, or is there some trick I’m missing? Great, now he’s healing faster than I can hurt him. Maybe if I use this other attack… oh, he teleported. Of course.”

PREACH! Fortunately, few of these agonising tropes are really represented by the game’s merch (okay, a couple are). So if you’re looking for some awesome figures, then proceed with caution and check out our selection:

If you are a fan of the Super Mario video game, you will really appreciate this hilarious video by a French guy.

Over in our Super Mario section at CmdStore, you can find Series 2 of Nintendo’s Collector’s Tin 2-inch figures!

Featuring six new figures to grow your collection, the figures are available as 2-figure tins or snaggable as a 3-tin (six-figure!) set. They’re from Goldie Marketing and make a great addition to any Nintendo fan’s toyshelf! Here they are.

And in other Nintendo news, here’s some exciting info from 411 Mania…

Nintendo has officially confirmed the launch titles set to accompany the 3DS when it launches in Japan on February 26, 2011. Currently, no Mario games have been announced for launch which is definitely surprising. However, Nintendo has Mario Kart and Paper Mario (working titles) in development and early reports have them slated for a later release date in 2011.

Below are the official launch titles for the 3DS.

…This gorilla seems pretty keen on getting its hands on Mario! 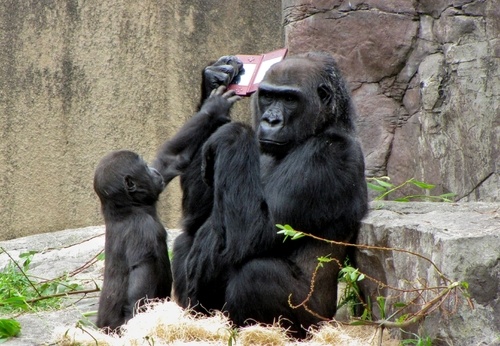 At the San Francisco Zoo yesterday, photographer Christina Spicuzza captured five pictures of gorillas playing around with a DSi XL. They later touched a monolith and used the handheld to slay an eohippus.

I kid! I kid! The story here goes that a kid dropped his DSi XL into the primates’ enclosure, and the larger gorilla seen here picked it up. A younger gorilla came over and asked for it, and was refused.

A zookeeper went in and traded the device for a much more useful apple, giving it back to the kid who dropped it. Spicuzza reports that, despite the fall and some gorilla slobber, the DSi XL still works, like a Samsonite suitcase.

Read the rest of this Kotaku article and see more pictures right here!

And, of course, while we’re on the topic of all things Nintendo and its main man, Mario, we’ve just gotten the 2-inch figure set collecting all of of series 1-6 of the Mario toy line! Check it out below, or click here to see the rest of our epic Super Mario collection!