Fewer nicknames are more awesome than “Young Wolf”, and that’s just one of many reasons why we can appreciate Robb Stark. The heir to Winterfell in HBO’s Game of Thrones, the firstborn son of Eddard Stark and Catelyn Tully traipses around the kingdom with his trusty direwolf and battle companion Grey Wind. From A Clash of Kings to A Storm of Swords, Robb is an integral part of the storyline in all of its treacherous drama.

Here from Funko is the second series of the Legacy Collection, wherein Robb bears a striking resemblance to his on-screen appearance courtesy of Richard Madden. Robb Stark stands six inches tall and comes in classic window box packaging for display or re-creation of important battle scenes.

Love’s not always wise, I’ve learned. It can lead us to great folly, but we follow our hearts . . . wherever they take us.

The famed knight from House Lannister, otherwise known as the Kingslayer, is an integral part of widely acclaimed HBO series Game of Thrones. Here, the Young Lion is re-cast as a six-inch action figure, ideal for display alongside your other Game of Thrones figures or for starting a collection of your very own.

Based on the likeness of actor Nikolaj Coster-Waldau, this Series-2 offering in Funko’s Legacy Collection is not to be missed. Jaime comes complete with his trusty sword, letting you re-create any of the most epic battle scenes from the series.

Jason Momoa is one of the most aesthetically memorable actors on HBO’s medieval fantasy hit Game of Thrones. His unique visual appearance, the result of expert work by hairstylists, makeup artists and costumers (and Momoa himself, of course), was a major draw for first-season viewers. 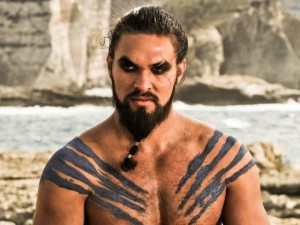 Here, all of this is paid homage to with this Khal Drogo figurine. He comes with two scythes and two swords, arms at his side and ready for confrontation. This is the next wave of Legacy Collection six-inch GoT figures by Funko, and the three new offerings are positively stellar. Not only is Drogo the Dothraki warlord (pictured below) ready to rage into your collection, but we have the critical point-of-view heroine Arya Stark, as well as the skilled androgynous warrior Brienne of Tarth. They are figures numbers eight, nine and ten, and are sure to be the highly anticipated precedents to figurines to come. Grab them now!

I wish the flames of MY funeral pyre would be able to hatch dragon eggs. 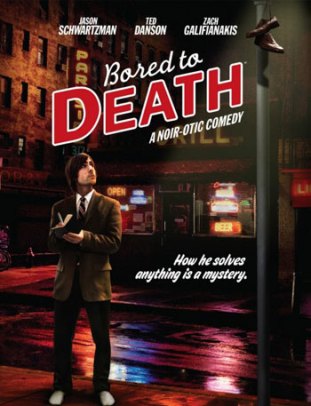 Two of my greatest fictional heroes are detectives: Batman and Philip Marlowe, Raymond Chandler’s protagonist from his incredible mystery novels. I started out by reading The Long Goodbye, which remains my favorite of the Marlowe novels–or just one of my favourite novels, period.

I’ve researched Chandler, now, watched the movies based on his writing and even picked up a copy of the graphic novel adaptation of Playback when I was at TCAF. In other words, I am always on the look-out for anything and everything Chandler.

Which is why I was thrilled to read the synopsis of HBO’s Bored to Death…
Novelist Jonathan Ames reimagines the detective genre for the Internet age in his offbeat comedy for HBO, Bored to Death. His writer protagonist, also named Jonathan Ames (played by the superb Jason Schwartzman), seeks some action in his life after a bad breakup and many nights with the bottle and weed. Lost and looking for connections, he decides to be the Philip Marlowe of Brooklyn, placing an ad for his detective services on Craigslist.

I quickly sought out the first season and was rewarded with a show that was hilarious, brilliantly-crafted and genuinely engaging. The three leads are absolutely perfect for their parts.

You can grab the whole first season on Amazon (it returns next year for a second outing) or take a look at the book that started it all!

Bored to Death Season 1 on DVD

Bored to Death: A Noir-otic Story by Jonathan Ames