The Force has definitely been awakened by now, and these guys are proof! Check out the highly anticipated Star Wars Black Series Wave 5 set of four six-inch figures from Hasbro. Your Black Series collection won’t be complete without Finn, Jango Fett, First Order Flametrooper and Han Solo.

The squad’s all here and ready to engage in the epic, galactic battle between good and evil. Grab all of them together and save some serious coin. Click the image below to find out more.

You heard it here first! Four totally new six-inch figures from the Star Wars Black Series are available for preorder on CmdStore.com. The early bird gets the worm with these high-demand collectibles — get your request in now to reserve total bragging rights when you’re the first among your friends to update your personal The Force Awakens army.

Jango Fett, Finn, First Order Flametrooper and the indispensable Han Solo will be landing on doorsteps in January of 2016. Not only do you get the exclusive chance to cop Wave 5, but you get to take advantage of our special package price when you buy all four. Very chill. Sub-zero, in fact. Black-hole status. Click on the image below to add these guys to your shopping cart!

Wouldn’t you like to have a reptomammal as as pet? The Tauntauns, natives of the icy planet of Hoth, proved to be loyal and trusty pack animals and patrol aids who could flourish in the cold winters of outer space. Patron animal saints to the Rebel Alliance, Tauntauns became a cultural staple, as we saw plush Tauntauns given as toys to small children during the Second Galactic War.

And who better to complement their legacy than a six-inch rendering of legendary human smuggler Han Solo, Rebel Alliance hero and New Republic icon. In the second series of the Star Wars Black Series’s deluxe figures, this Han-Taun double whammy will become nothing but necessary to collectors and casual fans alike! Place your order now for delivery in March.

They went ahead and made this and you know you want it. 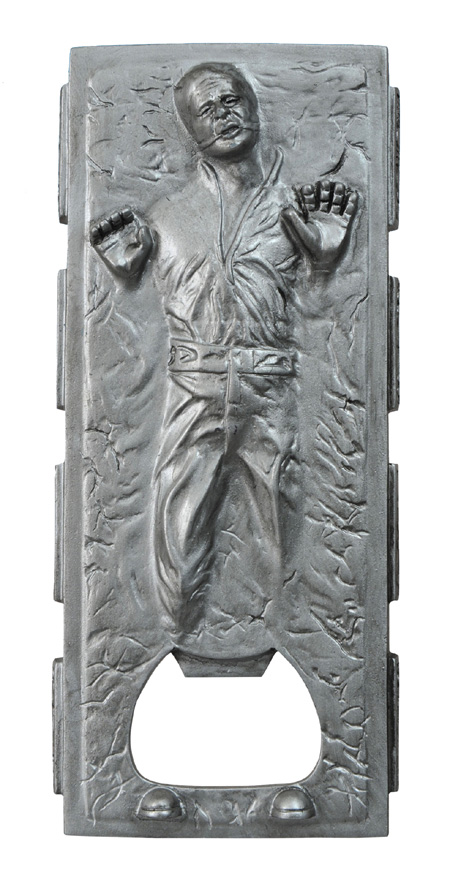 One of the most classic images from the Star Wars franchise is that of Han Solo trapped in Carbonite. So we sort of suppose it follows that… now you can open up a beer with it?

We’re not sure. All we know is that this now exists and it’s pretty sweet. Grab it here!

If you’re not brought to tears of laughter while watching Han Solo, Lando Calrissian and some Cloud City employees perform an impressive dance to a parody of Jason Derulo’s “Ridin’ Solo” called “I’m Han Solo,” the Force is so not with you it’s not even funny. Really, this thing is way beyond Jabba the Hutt’s house band singing a funk song in the “Return of the Jedi” Special Edition.

When originally announcing the game, LucasArts said that gamers will be able to bust a move “Solo style” in the “Galactic dance off” portion of the game. Now we know what they had up their sleeve, and it’s experiment sure to infuriate some, delight others, but surely captivate anyone who’s ever seen a Star War.

Buy the game online from Amazon.com.

One of the most enduring images from the Star Wars franchise is Han Solo suspended between life and death, trapped in Carbonite. And now, Sideshow Collectibles–creators of what might be the best-looking, highest-qualilty figure and statues out there–has brought the frozen Han from the silver screen to your display shelf.

As usual, each piece is hand-painted and numbered and every detail is captured perfectly. Impressively, the statue also includes some great light-up effects including a light from the base to illuminate the block itself, side-panel lights and an awesome third effect that lights up to simulate the super-heated melting process that frees Han. You can also take the frozen smuggler off the base and display him on your wall. This piece is a pre-order and will be shipping in the 4th quarter of this year! Reserve yours now!