We know you’ll channel your inner Michael Jackson and do a happy jig once you get a load of this Entertainment Earth exclusive! The Guardians of the Galaxy Baby Dancing Groot figural mug is about to shake up your morning cup of joe.

The adorable lil’ tree is life-size, just like you saw him in the movie. Use the Baby Groot lid to transform a mug into something from outer space. Don’t enjoy another hot beverage without this cutie!

Calling all those who still can’t get enough of Guardians of the Galaxy! We’re stoked to introduce the Monarch of Planet X in a totally brand-new form that will please eco-friendly collectors. The pop-culture icon made famous for uttering “I am Groot” is more than deserving of a place in the spotlight . . . or the sunlight!

Take a look at this adorable dancing Groot by NECA’s Body Knockers series. The six-inch toy based on the Marvel film dances from side to side when exposed to the sun — no batteries needed! Reserve your solar-powered Groot today.

If you’re still riding high on the wave of Marvel’s Guardians of the Galaxy, we’ve got something new and exciting for you. We’re stoked to introduce the Sideshow Collectibles and Hot Toys Movie Masterpiece Sixth Scale Gamora, in all of her emerald-hued splendor.

Thanos’s adopted daughter and a highly skilled assassin, Gamora is an essential part of the Guardians universe. From her new head sculpt and meticulously detailed costume, this rendering of Gamora is a work of art. She’s also crafted based on the image of actress Zoe Saldana as she appears on-screen. This is one warrior that will easily become the focal piece of your Marvel collection.

The craze-igniting Funko Pop! vinyl toys were brought to life by a guy who made his house’s first down payment with his collection of PEZ dispensers, according to the Rolling Stone report on the wild Pop! phenomenon. Anyone who loves toys that much is pretty alright in our books, and so we’re stoked to announce the next Pop! figures made by collectors with collectors in mind.

The loveable, adorable just-under-four-inches-tall bobblehead-like creatures with beady eyes and enormous heads are now paying homage to the upcoming Avengers: Age of Ultron movie. Check out the Iron Man Mark 43 Pop!, pictured below, decked out in his signature crimson-and-red suit. We’ve also got Guardians of the Galaxy‘s Yonda and Ronan, along with the sweet-as-pie Cinderella. They make the cutest gifts for that special toy-head in your life. Or you can snap up a few as an early birthday present to yourself, right? We won’t judge.

Rare depiction of Iron Man dousing the flames incurred from listening to the new Migos tape.

Marvel Comics’ Peter Quill isn’t just some ordinary Earth dude. Quite to the contrary — despite his human upbringing at the hands of his mother, he was entranced by the legacy of his alien father, answering the inner call to travel among the stars. And travel he did, all while assembling a ragtag team of interstellar misfits in order to save the universe from certain destruction in Guardians of the Galaxy. That’s quite the cosmic résumé, so we think he’s more than deserving of this awesome Hot Toys and Sideshow collaboration figure.

This Star-Lord comes in screen-accurate 1/6-scale format, measuring 12 inches tall. His head and face sculpt are based on the likeness of actor Chris Pratt, and with an interchangeable LED light-up masked head sculpt, you’ll have a genuine Guardians of the Galaxy collectible as part of your stockpile. A detailed costume and weapons accessories are the icing on the proverbial cake. Check out Star-Lord right now!

We’ve given you the reasons why Groot is so darn easy to love. We clued you in to how you can text Groot himself. And now we couldn’t be more stoked to tell you that we’ll be carrying a special statue of the pint-sized, leafy bundle of cuteness, Little Groot!

And who can forget when Little Groot shimmied and wiggled to The Jackson 5’s “I Want You Back” in Marvel’s Guardians of the Galaxy movie? If you didn’t find that cute, then you probably don’t have a soul.

Luckily, CmdStore.com and Sideshow Collectibles don’t discriminate against those who are lacking in the soul department. This silver-screen-accurate 1/4-scale collectible is five inches tall and comes complete with three interchangeable head sculpts, a textured paint job to play up his foliage aesthetic and poseable arms and body to re-create his adorable dancing scene. You may tell yourself that you’re ordering it for your 10-year-old niece, but we won’t judge if you keep it for yourself.

At long last, the much-loved furry and genetically engineered hero Rocket Raccoon from smash hit Guardians of the Galaxy is ready to hold onto your loose change with all of his might! The perfect character foil and partner-in-crime to the now-legendary Groot, pictured below, couldn’t be a better choice for one of Monogram’s next Marvel offerings.

And from DC, the classic 1966 Batman bank will not only safeguard those nickels and dimes, but will lend a nostalgic touch to any collection. Both vinyl bust banks are detailed enough that they look like mini-statues, but are playful enough to be right at home beside both your fine collectibles and on your bedside table.

Cop them both, because who knows? Maybe all of that spare change could one day help you buy an awesome Groot statue? Or an even bigger classic Batman?

Escape from Kyln! But don’t let your change do the same. Escape, that is. (This is where you politely laugh.)

Who knew that an extraterrestrial plant being and a genetically and cybernetically enhanced raccoon would become the best of pals? After being captured by the Nova Corps, these bounty hunters escaped imprisonment from the Kyln with the help of Drax, Gamora and Peter Quill. Along with the other Guardians of the Galaxy, they worked around-the-clock to stop the evil Ronan dead in his tracks. And with Groot’s kind gesture in permitting Rocket to perch on one of his gnarled tree-shoulders, the raccoon hero is able to fire at any and all approaching enemies from an enviable position.

Due to popular demand and the wild fandom surrounding Groot and Rocket Raccoon, Gentle Giant have announced that they will release this amazing 1/4 scale statue in June of next year! We’re stoked and we think you will be, too. Reserve yours today.

Their facial expressions say it all — part-time defenders of the universe, full-time best pals.

Say what? This statue is, in a word or two, absolutely fantastic. Depicting inseparable adventure duo and arguably two of the most beloved characters from Guardians of the Galaxy, this 5 inch ArtFX statue marks a pop culture era. Rocket Raccoon is primed for battle with a grimace and a bazooka, and Groot is his ever-enigmatic self, stoically leading his furry friend where he must go. Kotobukiya is to thank for this imaginative rendering. Grab it now!

When has a tree with gaping, dark-brown puppy-dog eyes ever garnered such mass approval? We never thought it would have happened before we snagged those tickets to see Guardians of the Galaxy, the highly-lauded film released in August in conjunction with Marvel Comics. Groot, the CGI alien plant who came to Earth to study humans, has already inspired countless tumblr posts, Instagram memes and Facebook statuses with those iconic three words — “I am Groot” — that seem to function as the limits of his peculiar vernacular. But no mind — the way this intergalactic woodland creature communicates is unspoken, as a concept of innocence and comic relief that’s just begging to be adored.

So, why is Groot just so darn endearing?

1. He stares into your soul. 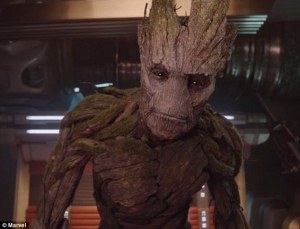 With the inquisitiveness of the most wizened of ancient sages, tons of muscly bark shoot truth arrows into your very core. Maybe it’s the serene, indifferent mouth posture. Maybe it’s his disarming lack of nose. Maybe it’s just that he could use a facial or two to make those under-eye bags just a little less cavernous. Whatever it is, we feel like we have no more secrets left — they’ve all been sucked out of us. By a tree.

Isn’t it telling that in all of his studies of human beings, he’s only found three words necessary to communicate with them? If that isn’t some sub-textual commentary on the simplicity of Homo sapiens, we don’t know what is. Being a linguistic minimalist also allows him to make some existential statement on the nature of being. “I am Groot.” But what are we? Are we really humans? Are we all just plants? Should we dissolve these boundaries and melt into the primordial pool of shared, sentient existence? WHAT DOES IT ALL MEAN?!

(…okay, you Guardians heads. Okay. So we know that it’s a larynx condition that merely causes it to appear as if all that he is saying is “I am Groot.” But we stand by this alternative interpretation, because it’s fun.)

3. He challenges our notions of beauty.

A lumbering wooden thing with cracked “skin” doesn’t exactly fit into our socially-accepted mold of what’s cute. But Groot’s real beauty is shown in his fierce protectiveness over his squad and his commitment to doing good in the context of the cosmos. His pure zeal for fighting the bad guys is inspiring to us non-leafy folk. And hey, maybe there’s a little bit of Groot’s loveliness in all of us — various online movements dubbed with some variation of “We Are Groot” have popped up, and that’s no coincidence. We find him gorgeous, just as we do the shining parts of ourselves.

4. He is equally awesome in comic form.

It’s important to remember The Bark-y One’s otherworldly origins. Officially a Flora colossus from Planet X, Groot first appeared in the Tales to Astonish Marvel comics as early as 1960, the brainchild of Stan Lee, Jack Kirby and Dick Ayers. Not only was he pictured alongside the Hulk, but was imagined as a nightmare of a young Peter Parker in the Spider-Man series. Groot is recurring and versatile, and is usually depicted doing rad, noble things. He’s also died multiple times and regenerated using a sprig of his former self. Trippy. And awesome.

Vin Diesel is reason number five because, well, it’s Vin Diesel. It’s in conjunction with reason number five-and-a-half because we already shared that with you here. But it bears re-mentioning, because… YOU CAN TEXT HIM. Seriously.