Do you believe in Magic? Alright, that was corny, I admit it, but seriously. Here’s an ultra-special San Diego Comic Con Magic: The Gathering Planeswalkers of the Universe Game Box. This is the third year in a row that Wizards of the West Coast and Hasbro have produced a set of cards specifically for the Comic Con, and so here’s your chance to cop a piece of convention history!

Acclaimed fantasy artist Wayne Reynolds joins us on the visuals, and they do not disappoint. Black-on-black aesthetics with shimmery reflective effects make this box set nothing less than luxurious. Treat yo’self!

The leader of Kilo Squad Damon Baird joins the Gears of War : Judgment collection from NECA. He’s pre-orderable now and will be shipping out later this month for fans of the franchise and the prequel game. He stands about 7 inches tall and comes equipped with a retro Lancer. 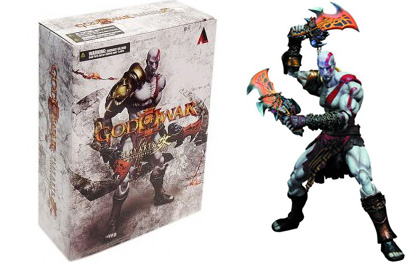 KRATOS is the latest character to be given the awesome Play Arts treatment, creating a deluxe figure boasting an awesome likeness, amazing details and great articulation. He’s 8 inches tall and makes a great addition to any God of War fan’s collection. Grab it now!

Here it is, ladies and gentlemen! The official announcement that so many people have been waiting for…HALO 4 IS ON THE WAY!

Naturally, we don’t know a great deal about what specifically is in store for fans of the franchise, but they haven’t let us down yet, so I’m pretty sure this next entry is going to be pretty fantastic.

Naturally, we’ve got a ton of Halo items from Joyride to Play Arts to McFarlane and you should probably check out the collection! 6-inch figures, 3.75-inch figures and even big ol’ 12-inchers are available for almost every character you could possibly want, good or evil, from all the games! Check it out!

TWO new figures have been added to our DC PVC Dolls and Figures Collection and they’re hot off the mean streets of the DC Universe Online MMO!

SUPERMAN and GREEN LANTERN look stunning in as 7-inch mini-statues that capture their dynamic looks in the epically-sized DC Universe game. Superman is posed ready for a fight and Green Lantern prepares to use his Power Ring. They stand on great display bases bearing their superhero insignia and are sure to look impressive on any fan’s toy shelf.

Halo fans can now snag the newly-arrived HALO REACH 6-inch action figures over at CmdStore! Though the vehicle section reminds on pre-order, we’ve just gotten a shipment of the character figures, both in one- and two-packs–all of which can be purchased individually or in sets of the entire series. Here’s a look at what you’ll see in each one!

Something of a departure from Webkinz and My Little Ponies…

During my trip to the New York Comic Con, I was lucky enough to get a chance to try out the preview demo of Grand Theft Auto: Chinatown Wars, for the Nintendo DS. My initial impressions were mixed: I was used to following the action on the touchscreen and the map/PDA/GPS looked complex, the line-up behind me made me rush through the mission and the DS graphics seemed far too simple and weak for the world of Liberty City, a throwback to the original Grand Theft Auto we’ve long left behind. I left it figuring it could be a decent cheap buy, but altogther too removed from the games that have taken the world by storm. I was dead wrong. I head seen some great reviews for the game before I headed down to buy something new for my DS, but I had kept my initial impressions and was hesistant to actually pick it up. When I got there, though, there were few games worth purchasing, so I decided to give GTA a chance. And I am so glad I did. This game (rated 18+ and easily living up to it) is a masterpiece. Returning to the birds-eye-view of the original, the cut scenes are cel-shaded comics in themselves, the dialogue is as crude and snappy as ever, the double-entendres as ironically cheesy and the gameplay–oh, the gameplay.

On top of the fact that driving through Liberty City is just as fun on the DS as it has been elsewhere, gamers will be floored to discover how much Rockstar has managed to cram into GTA:CW. Voice samples, dozens of missions, an incredibly massive, highly-detailed map and an excellent storyline. This might actually be one of the best games ever to hit the DS and with a ton of the game still left to play even after you’ve ‘completed’ your original tasks, you’ll be clamoring for a sequel the moment you get started. Rockstar, please deliver!