If you’re a fan of ALL-STAR Superman, things are pretty awesome for you right now. Not only is today the release date of the ALL-STAR SUPERMAN animated film, but we’ve also got a brand-new action figure 2-pack of the Man of Steel and his Bizarro World double now available for purchase. Check it out: 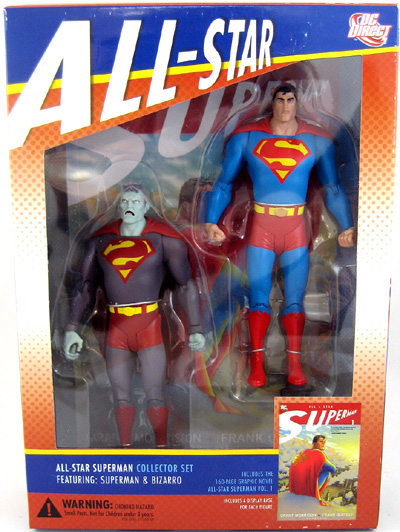 The All-Star Superman Bizarro Box Set features both characters as 6-inch figures from DC Direct and comes complete with a 160-page reprint of All-Star Superman, Vol. 1! Definitely a great find for collectors or Superman fans who want to snag the book and some sweet figures together.

And, of course, the reviews are in for the flick and are generally pretty favourable. Here’s a pretty balanced one from HuffPo’s Scott Mendelson:

If you ask most casual comic book fans to name their favorite Superman story, they are likely to choose one of the countless origin stories (A Superman For All Seasons, Superman: Birthright, Superman: Red Son, etc) or the handful of stories that deal with ‘the end of Superman’ (The Death of Superman, Whatever Happened to the Man of Tomorrow?, etc). Frank Miller would tell you that it’s because Superman is such a godlike character, that the only story worth telling is his origin, since most other tales inevitably deal with how a god deals with the puny problems of mankind. But, without knocking many of the fine stories that take place in the middle of Superman’s career (Superman: Peace On Earth, Lost Souls, etc), the character is such a primal piece of American myth-making that it makes sense that the most powerful narratives would be the two distinctive Campellian archetypes: the hero’s journey and the old man coming to terms with death. All-Star Superman is a solid example of the latter, even if it loses much of the impact of the original source material.

A token amount of plot: Superman (James Denton) is dying. After rescuing an imperiled space shuttle that was sabotaged by Lex Luther (Anthony LaPaglia), the Man of Steel has received a lethal dose of radiation from the very yellow sun that gives him his powers, and his days are indeed numbered. With time running out, the last son of Krypton tries to make the most of the time he has left, which includes getting serious with Lois Lane (Christina Hendricks), making some genuine decisions about the contents of his Fortress of Solitude, and making some kind of peace with Luthor. But unexpected complications ensue and the final days of Superman’s life may hold the key to his greatest triumph.

First of all, if you’ve ever read a Grant Morrison comic book, you know that this is not necessarily a film for complete newbies. The film is a condensed adaptation of his acclaimed twelve-issue stand-alone story arc that was published from 2005-2008. Grant Morrison does not generally do street-level, real-world comic book storytelling. Morrison pushes the fantastical elements of these characters as far as he can get away with and often goes out of his way to include characters and concepts that go way back in the Superman mythos. Even with a token amount of streamlining (there is quite a bit left out of this 76-minute feature), there is a fair amount of offbeat and heavily science-fiction-y elements still intact. Point being, if you’re just a casual Superman fan, you might be a little confused by much of the film. Still, the picture works best when it focuses on the core relationships that Superman shares with Lois Lane and Lex Luthor.

In fact, the film’s core flaw is just how much is missing from the original story arc. Dwayne McDuffie and director Sam Liu have cut much of the smaller-scale humanity from the story, omitting character beats and somber meditation while keeping most of the wham-bam spectacle. The original comic series was basically a series of ‘things that Superman wanted to do before he died’, and many of the issues were nearly stand-alone. Most of the ‘challenges’ have been cut in order to focus on the portions of the story that more easily gel into a complete narrative. The film plays less like a Cliff Notes version of the story than a heavily abridged variation that often feels cut to the bone.

Still, there is much to appreciate in what made the cut. Despite the PG rating, the film is full of intense action scenes and occasionally jolting violence (it’s no less violent than the PG-13 DCAU films, just lacking in blood and gore). A mid-film rampage by the Parasite is gripping, even as it seemingly shows Clark Kent committing murder (when you freeze someone and leave then frozen in the path of rampaging monster, that’s on you). And the final battle, which I won’t reveal, is rooted in character and relationships more than pure superhero smack-downs.

The vocal cast is solid all-around, with James Denton and Christina Hendricks making a compelling romantic duo. Anthony LaPaglia makes a fine Lex Luthor, but I could not shake the sounds of Clancy Brown, especially has Luthor’s arc has more than a little in common with the dynamite Mark Miller story “How Much Can One Man Hate?” (Superman Adventures 27). The animation is peerless in the direct-to-DVD realm, as usual, with the color scheme and character models accurately reflecting the original comic book.

Overall, All-Star Superman is a suitably epic look at the would-be final days of ‘Earth’s Greatest Protector’. If I miss certain portions of the story that didn’t make the film (such as the Smallville flashback sequences and the creation of Earth Q), I must concede that the film more-or-less works as an often weird and occasionally goofy standalone action picture. The finale reaches an emotional crescendo that makes up for some of the more outlandish moments in the middle portion of the film, and it’s certainly a more artful effort than Superman/Batman: Apocalypse and Justice League: Crisis on Two Earths. Just remember that this is a Grant Morrison story, so it is not what anyone would call ‘casual viewing’. But if you’re willing to treat this film as more than just a random rental, it’s worth the effort.

Interest piqued? Than be sure to pick up the film–or the comic that inspired it–right here:

Every so often, a story comes along that really redefines a character, bringing to the page a tale that is both new and yet instantly classic. Such was the case with Grant Morrison and Frank Quitely’s All-Star Superman, which originally ran between 2005 and 2008 and tells one of the most brilliant character-driven Superman stories written since the hero’s creation 1938. If you’re a fan of the work, then you might be pleased to know that DC Direct has just given a release date for two new figures that you can pre-order now.

Standing 6 inches tall, the 2-pack features both Superman and his backwards nemesis, Bizarro Superman, whose appearance and demeanour make him the complete opposite of the good-natured, handsome hero. Both are impressively sculpted and loyal to Quitely’s unusual and striking style.

Best of all, even if you haven’t read the story, the figures come with a new edition of the 160-page All-Star Superman Volume 1. It also makes a great reread or fans or a great new copy to pass around in order and convert the uninitiated into a love of Clark Kent.

The All-Star Superman and Bizarro 2-pack can be pre-ordered now and will be shipping in January of 2011.

And in other Supes news, Metropolis Illinois just unveiled its tribute to the Man of Steel in the form of a statue of Superman’s lady love Lois Lane, based on Noel Niell’s portrayal of the Daily Planet reporter. You can learn more about the statue by visiting NoelNeillStatue.com. Just click the pic below!