Shipping later this month, you can now pre-order the next wave of Kingdom Hearts toys from Square-Enix and Formation Arts. Unlike previous waves, this one doesn’t feature articulated figures, instead creating statues with bases that capture not only a particular character, but items and decor that bring to the pieces the mood of the game.

This series unites Sora, Minnie Mouse and fan favourite Jack Sparrow, who lounges atop a treasure chest. They look great on display and make a very cool addition to any player’s toy shelf. They can be purchased individually or as a set of three (for a savings of $5.90). Check ’em out!

From the folks at Wired.com…

Sick of angsty amnesiac twentysomethings with lots of giant zippers on their clothes and haunted pasts getting in the way of your medieval fantasy role-playing games? Then you are the target audience for Square Enix’s latest Final Fantasy.

Another Final Fantasy, you say? On the Nintendo DS, you say? Impossible! And yet it is true: Square Enix has announced Four Warriors of Light: Final Fantasy Gaiden via a teaser website and the Japanese comic magazine Shonen Jump. We’re not going to reprint the magazine scans (possible NSFW pop-ups), but there’s a good deal we can glean from Jump’s coverage.

Four Warriors of Light takes Final Fantasy back to the old school. As a 14-year-old boy, you’re tasked by the king of your tiny hamlet to go off and rescue the princess, a classic videogame story if ever there was one. You’ll eventually form a party of two boys and two girls, who will go off and save the world.

The gameplay system is also in the classic turn-based style. The menus seem to have been designed around the DS’ touch screen — each character’s list of possible actions looks like a tabbed browser window, which should make flipping between them quite easy.

The Jump article, stingy with details as it is, notes that there is no “Magic” command in the menu, but there is a “Charge” command. In the status screen, we can see that characters seem to have “AP” instead of magic points, which is represented by a row of yellow dots. Since each action in the menu, including “Fight,” has a yellow dot next to it, the system seems to be that you spend AP whenever you do anything, and you can spend a round charging it up if you need more.

You can equip swords, shields, armor, and accessories, and just like in Final Fantasy Crystal Chronicles, your 3-D character’s outward appearance will change to reflect what you’re packin’.

Speaking of which, while the game seems to use the same 3-D engine that’s already taken Square Enix safely through numerous Final Fantasy adventures on the Nintendo DS, the colors seem a bit more painting-like, maybe a little softer and muted. I think it’s a more pleasing look, a nice contrast to the sharper colors and characters of the other games.

Four Warriors of Light, from what we can see today, is as close as Square Enix has ever gotten to creating a new Final Fantasy in the classic tradition, completely from scratch. I’m quite interested to see how this plays out, since I’m more of a fan of the DS remakes now than I am of the brand new games in the series.

It’s slated for release this fall in Japan. I’m sure the bankable brand name alone is enough to secure it an American release in 2010.

It’s refreshing to see a franchise that has arguably become mired in its own coolness and self-love being given an entry that’s more about the classic fun and gameplay than the style. Much like the return of a less brooding Batman in the upcoming Wednesday Comics or The Brave and the Bold, Final Fantasy might just need something like this to garner new fans or bring back old ones. And since it’s Square-Enix, you know they’re going to pull it off beautifully.

And in the mean time (2010’s still too far off!), we’ve got a collection of Final Fantasy figures that you can check out by clicking the links below. Everything from wall scrolls (I own an FF8 and a Sephiroth) to Cloud Strife plush toys and replica weapons is right here in-stock or available for pre-order. 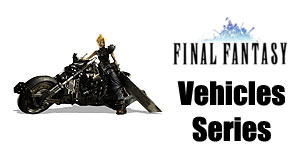 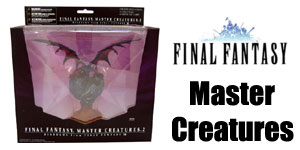 After riding my bike this weekend, I had to make a comment on one of my favorite toy that includes a motorycycle.

There are two different versions: Cloude Strife & Fenrir Motorcycle and Cloud Strife & Daytona Motorcycle. Which one do I like more? I love them both….the Daytona version looks like a cool futuristic chopper. I do have a weakness for choppers….flashback to Peter Fonda and Dennis Hopper from Easy Rider….clearly one of the movies that started my fascination with motorcycles but it wasn’t until I saw Tom Cruise in Top Gun that I thought I could get hot chicks and look cool…now if I could only learn how to ride my bike carrying a huge sword! By the way, it is physically impossible to do that (at least safely). 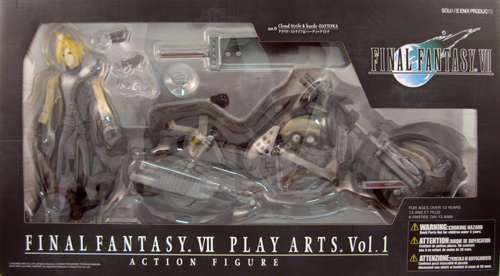