Standing 8 inches tall and looking every bit as impressive as the Marvel Select collection demands, CAPTAIN AMERICA rocks his classic, all-American look as he stands tall on Liberty and Justice (literally–check out the stand!). It’s a classic throwback to a character whose star is only rising as The Avengers movie looms large. The fully-articulated figure comes with an impressive diorama-style display and fits in extremely well with the rest of the Marvel Select line-up. Check it out!

Joining the ranks of the Superhero Squad is this brand new 3-pack, CAPTAIN AMERICA: THE FIRST AVENGER – BATTLE AT RED SKULL LAIR.

Beyond a mouthful of a name, this awesome collection consists of Captain America himself, Bucky Barnes and Red Skull as cute-ified versions of the characters you’ll be seeing in the upcoming summer film, Captain America: The First Avenger.

And speaking of the film, a new trailer’s been released so you’d best check it out! 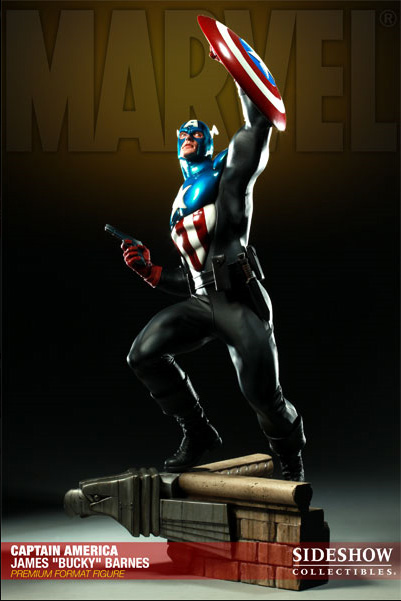 James “Bucky” Barnes takes on the Captain America mantle in this stunning Sideshow Statue . Standing an amazing 26 inches tall, it’s another masterpiece from a collection that isn’t short on them.

Standing on a rooftop (which may well be the Chrysler building) above the city and indeed the world he protects, he holds a pistol and raises the iconic shield. On top of being generally rad, though, Bucky also boasts a real fabric costume, which adds a very impressive little something to this piece.

Black Widow & Winter Soldier make up the latest of the Marvel Twin Packs & Face-off box sets. Pairing the beautiful-but-deadly Natalia Romanova with Bucky Barnes’ Winter Soldier, the two-pack also includes alternate heads for each character, to allow a couple different looks. Both stand about 6 inches tall, feature a ton of articulation (especially impressive for the size) and look just great, ready for display by any Marvel fan.

And if you’re among those waiting for more from the Avengers team, then you might be pleased to at least have this to tide you over, from SoulCulture>’s write-up on the Empire Captain America cover: 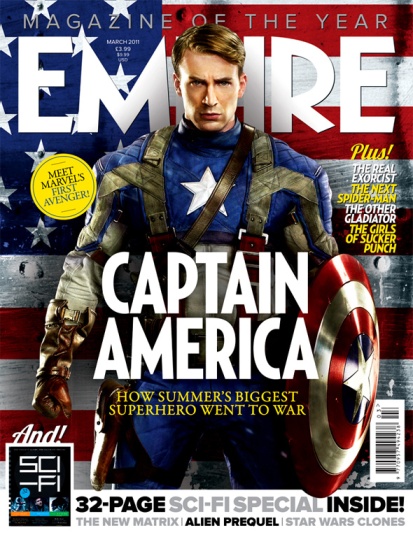 “The First Avenger: Captain America” will focus on the early days of the Marvel Universe when Steve Rogers volunteers to participate in an experimental program that turns him into the Super Soldier known as Captain America.

Chris Evans will star as Captain America and Sebastian Stan will portray Cap’s sidekick Bucky in the film.

Joe Johnston has signed on to direct Marvel Studios’ “The First Avenger: Captain America,” hitting theaters on July 22, 2011. One of a continuing slate of films being produced by Marvel Studios based on the Marvel characters, “The First Avenger: Captain America” joins “Iron Man 2″ on May 7; 2010, “Thor” on May 6, 2011; and “The Avengers” on May 4, 2012. 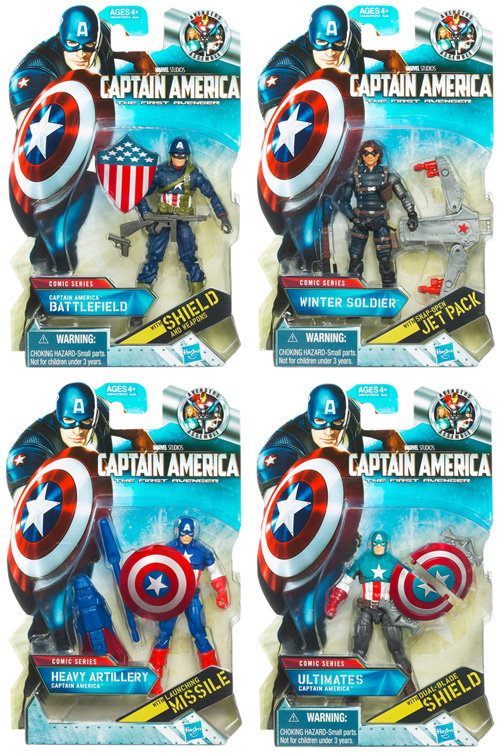 We’ve already seen a couple images from the upcoming CAPTAIN AMERICA film, but now Entertainment Weekly is bringing us something more…

For fans of superhero movies, the most patriotic holiday on next year’s calendar won’t fall on July 4th, but exactly 18 days later. That’s when Paramount Pictures will release Captain America: The First Avenger, a big budget adaptation of the Marvel Comics shield-baring super-soldier. The new issue of Entertainment Weekly offers your first look at star Chris Evans in the hero’s red, white and blue threads — but you can get a peek at the man in uniform right here, right now.

Our story also brings you to the set of the London-based production, directed by Joe Johnston (The Wolfman, October Sky). During a break in shooting, Evans — on his second tour of Marvel duty, having played the Human Torch in Fox’s Fantastic Four films — explained he was reluctant to accept the call of Captain America, in part because he had already portrayed a Marvel-ous mystery man. Of course, he also worried about the potential cost of failure, but he also worried the potential cost of fame should the movie be a hit.

Our story also brings you to the set of the London-based production, directed by Joe Johnston (The Wolfman, October Sky). During a break in shooting, Evans — on his second tour of Marvel duty, having played the Human Torch in Fox’s Fantastic Four films — explained he was reluctant to accept the call of Captain America, in part because he had already portrayed a Marvel-ous mystery man. Of course, he also worried about the potential cost of failure, but he also worried the potential cost of fame should the movie be a hit.

“At the time, I remember telling a buddy of mine, ‘If the movie bombs, I’m f—-ed. If the movie hits, I’m f—-ed!’” After declining the part three times, Evans took a meeting with Marvel execs and Johnston and was dazzled by their plans for the movie. He still felt wary about suiting up for Captain America — but then he had an epiphany. “I was just scared,” he says. “I realized my whole decision making process was fear based, and you never want to make a decision out of fear.’” Evans signed a six-picture deal with Marvel to play the character, and he has no regrets: “I can’t believe was almost too chicken to play Captain America.”

The movie — which also serves to set up Marvel’s 2012 superhero team-up, The Avengers — hews closely to Captain America’s WWII-era origins. The year is 1942, and Steve Rogers is a scrawny lad who desperately wants to fight Nazis for his country but can’t because he’s been deemed physically unfit. His fate — and his physique — is radically transformed when he signs up for Project: Rebirth, a secret military operation that turns wimps into studs using drugs and assorted sci-fi hoo-ha. There’s a love interest (Major Peggy Carter, played Haley Atwell), there’s a sidekick (Bucky Barnes, played by Sebastian Stans), and there’s the Red Skull (Hugo Weaving), Hitler’s treacherous head of advanced weaponry, whose own plan for world domination involves a magical object known as The Tesseract (comic fans know it better as The Cosmic Cube).

“The interesting thing about this character is that he’s an everyman who in the course of a few minutes become a perfect human specimen. That has to create some interesting personal issues,” says Johnston. “I saw it as an opportunity to make a superhero movie that felt real, that didn’t have to rely on an overabundance of fantasy elements.”

If you’re a Captain America fan counting down to the film, then here are a couple figures you might enjoy in the mean time–you know, until the movie brings a boatload more!

MARVEL SELECT CAPTAIN AMERICA
An 8-inch figure sculpted by Sam Greenwell, it features a gargoyle base that makes it awesome for display and can be posed in a ton of different ways thanks to its 14 points of articulation.

MARVEL LEGENDS SERIES 1: CAPTAIN AMERICA
From the first series of the amazing Marvel Legends line, this Cap figure is based on his first appearance in 1941, when he was created by Simon and Kirby to stand as both character and icon in the Marvel Universe and the American consciousness.

KOTOBUKIYA CAPTAIN AMERICA STATUE
The brilliant designers at Kotobukiya present this 12.5-inch statue of Cap holding his iconic shield aloft and looking ready to face whatever enemy of his nation should come his way.

CAPTAIN AMERICA vs RED SKULL TWIN PACK
From Marvel Legends comes a 2-pack that represented one of Marvel’s greatest conflicts: that between Captain America and the villainous Red Skull. The arch-enemies come with a 32-page comic that explores their long-lasting feud!