The gaming experience that captured the attention of players the world over is now brought to life by the good people over at NECA. Here’s the Batman: Arkham Origins Grapnel Launcher, an authentic prop replica reproduced in fantastic detail so you can feel like you’ve jumped right out of the game itself.

This replica accessory stays true to the aesthetic of the 2013 action-adventure game as it was designed using the original digital files from the game itself. Batman’s gadget can be yours as you use the squeeze-trigger and articulated hook attachment to get the job done. Click on the image below to add it to your cart!

Batman! Even the name itself incites excitement. (Well, at least if you’re a geek just like us. But we’re hoping you are.) We’ve got a brand-new three-pack of figures that’s about to rock your collection to the core. Here’s the Batman: Arkham Origins 3-Pack Series featuring Lady Shiva, Electrocutioner and Dr. Harleen Quinzel.

It’s time for the damsels of mayhem to come out and wreak delightful havoc on all who may stand in their way. Lady Shiva and the good Dr. Quinzel stand six inches tall and are based on their appearance in the hit video game. The Electrocutioner looks as wonderfully scary as ever in his gruesome black kit. Grab it now!

They’re finally back! These six-inch guys quickly became a hot item for collectors and fans of Batman: Arkham Origins alike. The epic bat-winged hero really doesn’t need an introduction, does he?

Sassy Batman is the best kind of Batman.

And when he’s engaged in a gridlock of a battle of wills with the ultra-bad-guy Deathstroke “The Terminator”, something interesting is bound to happen. If these two figures are missing from your collection, now is the time to snap them up!

Supervillain Bane is a relatively new character in the DC universe, introduced by the comics franchise as late as 1993. He’s an escaped convict from an island prison somewhere in South America, and is known for his amped-up and muscular appearance that came from some dastardly experimentation with the drug Venom.

And now, from the much-loved video game experience Batman: Arkham Origins comes this eight-inch offering in the form of masked supervillain Bane. Due to popular demand, we’ve restocked him just for you! This version of Bane is based on his aesthetic as seen before the events of the preceding games Batman: Arkham Asylum and Batman: Arkham City.

After all, who else could be perpetually haunted by the “bat-demon” of his nightmares? Own this cryptic, fascinating character today!

“I am Bane, and I could kill you… but death would only end your agony, and silence your shame. Instead, I will simply… BREAK YOU!”

Square Enix has just delivered two new 10-inch figures right to our (currently ice-covered) doorstep, and boy, are we excited about these ones. (At least, we will be once our boogers de-frost.) This is the second wave of Play Arts Kai toys from the 2013 hit Batman: Arkham Origins. His vibrant green and violet ensemble complement his ghastly white skin and festering wound-colored lips, appropriately alluding to the psychopathic tendencies that lie within. Pointing a gun, presumably in the direction of Batman, the dark-minded criminal reminds us of what happens when an individual decides all hope for humanity is lost.

Generic, dystopian conclusions about the state of mankind aside, you need to cop this dude. Grab him ASAP because he’s coming for you — and we’ve got Robin, too!

Should I blow Batman to bits or nah?

The 2013 action-adventure gaming experience came out to critical acclaim and has since amassed a significant following. The third installment in the Batman: Arkham series, Batman: Arkham Origins is a third-person journey into how it all began, allowing players to re-create crime scenes to sleuth out criminals.

Here, four essential six-inch characters from the game are assembled into one big whammy! Of course, there are Batman and the Joker. Black Mask is clad in a pale white suit that contrasts sharply with his dark, chilling countenance. And Deathstroke is in his telltale military-grade armor, a ruthless mercenary and anti-hero with a speckled past. This quartet is essential to the world in which Batman: Arkham Origins unfolds. Grab all four of them in this perfect holiday package!

Batman, the Joker, Deathstroke and Black Mask — what a delightful tea party these four would have.

Time flies, and perhaps more rapidly so for bat-winged heroes like the protector of Gotham City himself. For Batman’s 75th (!) anniversary come four (!!) special-edition paint deco (!!!) figurines in one neat package.

Here, the Dark Knight is presented in 6-inch format in four of his incarnations, based on the designs of Bob Kane (first appearance), Jim Lee (New Frontier), Darwyn Cooke (Hush) and the Batman: Arkham Origins hit video game. A must-have for anyone obsessed with the valiant bravery and idiosyncratic charm of Batman in all of his forms.

Deathstroke, Joker and Copperhead come together in a triple whammy as a nod to epic video-gaming experience Batman: Arkham Origins. The 2013 Warner Brothers action-adventure game was a smash hit, most certainly due in part to the presence of three whopping personalities who were set on deviously confounding Batman and his allies. Deathstroke, the aged, rogue fighter, and Copperhead, the maniacal, venemous gymnast, are joined by the ever-present and ever-scheming Joker — all in 6-inch format. Grab a piece of the action to keep for your very own this fall.

As dark and conniving as the alleyways of Gotham City.

Straight from Batman: Arkham Origins, the latest chapter in the Arkham saga, Batman stands 18″ tall and features over 25 points of articulation, a real fabric cape, and accessories which include Batarang and grapnel gun

This figure is amazing. The head sculpt is phenomenal and I think this figure represents the BAO Deathstroke very well. I think if you are a fan of the new Batman Arkham Origins video game and are into collecting Batman figures, this is a must have. DC collectibles also has the New 52 version but for the money, I think you will be very pleased with your purchase. You want this Deathstroke on your shelf. 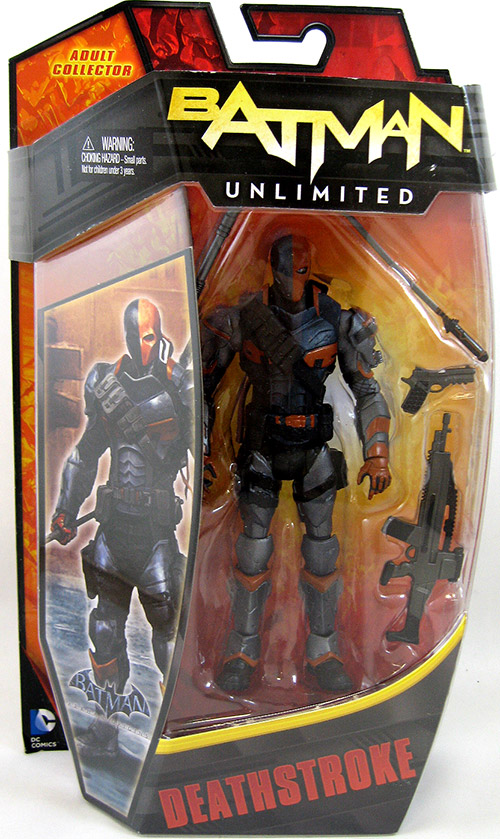