One of four in this series of 3.75-inch characters, Like other new renderings in the Reaction Series, Marty has five articulation points so he can teach your other action figures a thing or two about an ollie . He’s in retro Kenner format, and is ready to help you reminisce about banana boards and acid-wash jeans — in other words, all the best things to come out of the 1980s. If you’re a Back to the Future nut, make sure you snap him up. We also have Emmett Brown, Biff Tannen and George McFly in stock so you can collect all four of ’em.

Build your very own miniature version of the iconic DeLorean time machine that Dr. Emmett ‘Doc’ Brown and Marty McFly famously used to travel Back to the Future. Selected by LEGO CUUSOO members, this amazing model features lots of cool details, like opening gull-wing doors, fold-up wheels, flux capacitor, time travel display and 2 license plates. We’ve also included extra engines and wheels so you can recreate the different variants of the time-traveling car featured in the Back to the Future movies. Finally, this unique set also includes a fascinating booklet containing production notes, original images and fun details from the movies. Includes 2 minifigures: Marty McFly and Doc Brown.

Though scientists still have a couple years to perfect the technology if we’re being film accurate, you can enjoy this placeholder in the meantime.

From MattyCollector.com, a haven for collectors, this Hoverboard is life-size (measures approximately 28″ x 8″ x 3″), features a deco featuring Mattel logos and boasts authentic sounds taken right from the film! It won’t hover, but it’ll at least allow you to glide on most level surfaces.

We know you’ve always wanted one, so it’s high time it was made available. And who better to do it than the Kings of the 80s, Mattel?

Now, this thing professes to be “Movie-accurate down to the smallest detail”, but we’re sad to admit that the thing doesn’t hover– you’ll have to wait until at least 2015 for that. And hey, this thing will glide across level surfaces so we like to think you’re part of the way there. A one to one scale model this thing is approximately 28″ x 8″ x 3″ and can be pre-ordered now to ship out in January 2013.

The mythical Nike Mag — the futuristic, light-up, athletic shoe from 2015 that has captured the fascination of sneakerheads and movie fans ever since Marty McFly donned a pair in “Back to the Future Part II” in 1989 — is finally a reality.

The footwear, which was unveiled by Nike in Los Angeles on Thursday, comes with a couple of caveats. First, the shoes lack the self-lacing mechanism depicted in the film. Second, there are only 1,500 pairs in existence. Third, they can be bought only via auction through eBay.

But the good news is that the auction of the shoes will go to the Michael J. Fox Foundation to fund Parkinson’s disease research. That will amount to no small chunk of change given that a small ceramic replica in a box signed by Tinker Hatfield, designer of the shoes that appeared in the original film, brought in $3,500. And a pair of the Nike Mags packaged in a bright yellow packing case (which will be personally signed by Michael J. Fox) fetched $37,500 in just eight minutes of frenzied bidding at a live auction Thursday night at the Montalban Theater in Hollywood.

The centerpiece of that event — which included appearances by actor Christopher “Doc Brown” Lloyd and Hatfield (Nike’s vice president of innovation, design and special projects) — was the reveal of the shoes themselves in all their glowing LED and electroluminescent glory.

The shoes were designed to be precise replicas of the film version, right down to the contour of the gray fabric upper, the speckled Zolatone sole and glowing Nike logo strap. The astonishingly light 2011 Nike Mag (the name refers to “magnetic levitation”) is the company’s first rechargeable shoe, and can glow for five hours between charges.

While technology hasn’t advanced far enough to satisfy the most hard-core movie fans and sneakerheads who’ve long hoped for the self-lacing feature depicted in the movie, Hatfield dangled a shoelace of hope.

“We’ve got some prototypes that work but they’re not ready for prime time yet,” he said during an interview earlier in the day.

So, if a self-lacing version is in the works, why release a non-lacing version now? Nike’s Chief Executive Mark Palmer and Michael J. Fox Foundation co-founder and executive vice president Debi Brooks point to the opportunity to leverage the enthusiasm for the Nike Mag in hopes of doubling the amount of money raised.

“Google co-founder Sergey Brin and his wife Anne Wojcicki have pledged a matching grant of up to $50 million to the Michael J. Fox Foundation through the end of 2012,” Brooks said. “That’s the kind of thing that can really help us envision a future without Parkinson’s.”

If you want something completely different and cool….check out the DeLorean replica car we have in our store….it lights up and makes sounds.

This brand new item from Diamond Select will take you back in time to 1985 and the Back to the Future film franchise starring Michael J. Fox and Christopher Lloyd. Perhaps the most iconic element of the film, the folks at Diamond have brought us the DeLorean time machine!

Modeled at a 1:15 scale, the DeLorean features light and sound effects from the film and measures 14 inches long with a body made out of metal. Any fan of the film will surely want to snag this before it’s gone!

And another treat for fans is this weekend’s Las Vegas DeLorean show! Coming from all across the continent, the show brings together DeLoreans, fans, drivers and some very cool invited guests!

Check it out the Delorean site! 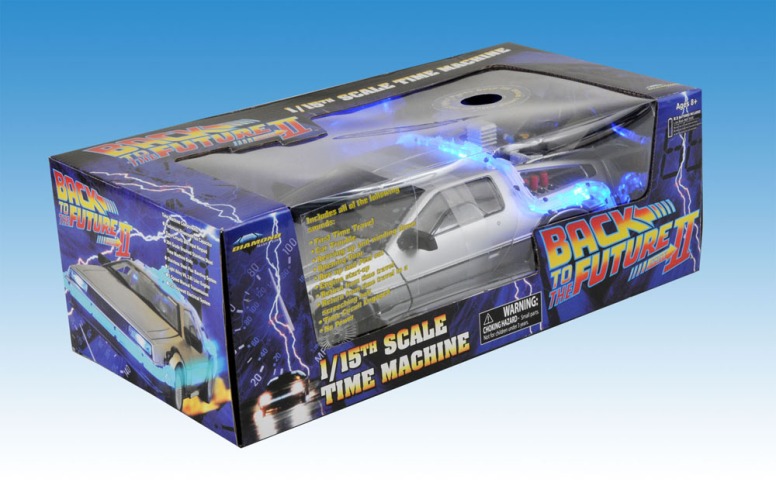 Buy the Delorean Replica at www.Cmdstore.com