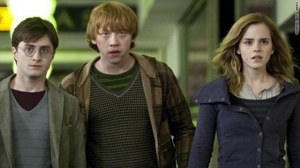 “Harry Potter and the Deathly Hallows — Part 1” posted the franchise’s best opening ever by grossing $125.1 million this weekend, according to studio estimates. That figure smashes the wizarding series’ prior opening-weekend record of $102.7 million, held by 2005’s “Harry Potter and the Goblet of Fire.”

The new Potter flick also registered the sixth-largest opening weekend of all time, landing just behind this year’s “Iron Man 2,” which debuted to $128.1 million in May.

The movie gathered $24 million from those screenings en route to a Friday tally of $61.2 million, the fifth-best opening day, period. After Friday, “Deathly Hallows” essentially followed the box-office trajectory of “The Twilight Saga: New Moon,” which was released on the same November weekend last year.

“New Moon” earned a record $72.7 million its opening day, and then fell 42 and 34 percent on Saturday and Sunday, respectively.

“Deathly Hallows” held up a tad better, dropping 38 percent on Saturday (for $38.2 million) and an estimated 33 percent on Sunday (for $25.8 million). While Warner Bros. may have preferred a somewhat steadier ride from “Deathly Hallows,” no one’s complaining, least of all moviegoers. CinemaScore audiences gave the movie an “A” grade.